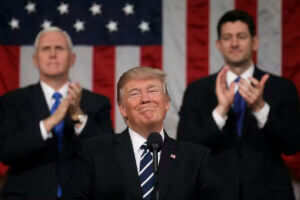 Let’s face it: we need to put Trump somewhere until he’s struck with dementia or he visits what Shakespeare called the “undiscovered country.”

What better position than Speaker of the House of Representatives. He doesn’t have to be a member of Congress. And, this way, he doesn’t have to run for President again. But, best of all, he gets to be at the center of attention. Who wouldn’t want to read the expression on his face as Biden is (nervously, to be sure) giving a SOTU address? Now, lest you think this is purely tongue-in-cheek or fanciful thinking, keep in mind that at least 4 groups benefit.

Let’s walk through it:

If you want Trump campaigning with you, then this is too easy. Until the GOP takes back the White House, it gives Trump a symbolic, but substantive leadership role in the party.

These guys want to replace Trump and offer a new way forward. If he’s preoccupied on Capitol Hill then they don’t have to worry about the competition.

Trump has made life so easy and enjoyable for candidates, fundraisers, copywriters, and other operatives who’ve hadn’t expressed an original thought in at least 15 years.

Essentially the same thing as #3 but for them it’s ratings.

Everyone has a reason to have a Speaker Trump: