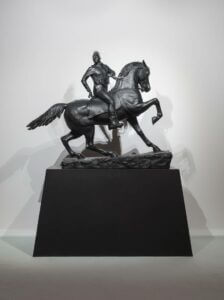 The last Confederate statue was removed from Richmond, VA in 2021.  But simply removing reminders of our history is, apparently, not enough.  Johns Hopkins is adding a new statue to their property, based on a famous statue removed from Richmond last year.  Check out this description:

What Wiley created and unveiled was Rumors of War, a 27-foot tall bronze equestrian statue modeled closely after a Richmond statue featuring Confederate General J.E.B Stuart. While the horse is almost exactly the same, Wiley swapped the sword-brandishing Stuart in his military greatcoat for a dreadlocked Black man in a hoodie, distressed jeans, and Nikes. Wiley, who was tapped to paint President Obama’s official portrait in 2018, says the sculpture, like his paintings depicting Black figures in Old Master-inspired settings, honors the “monumental in people once considered peripheral,” and that the bronze depicts “the evolution of our society.”

Today’s left, like other power-hungry groups who have sought to control various societies throughout history, understands the Orwellian principle of controlling the future by controlling the past.  Or rather, by erasing the past and replacing it with something that fits the narrative they are trying to impose on their subjects.  This is clearly part of that project.  But a dreadlocked black man in modern clothes triumphantly riding a military horse from 170 years ago into, um, into what?  A shopping mall?  What on earth?  Imagine someone 170 years in the future, gazing upon this statue – what will they think?

They’ll probably think the same thing they do when the read history books about our era:  “Those people back in 2020 weren’t serious.  About anything.  I mean, what on earth were they thinking?  Not much apparently.  A military horseman.  Wearing distressed jeans and Nikes.  For heaven’s sake…“ 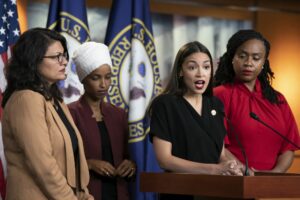 I suppose this makes sense, in a way.  The left removes statues about an era in our history which makes us uncomfortable, and they replace them with statues which make no sense whatsoever.  That frees one from introspection or any effort at understanding other people of other eras; or anything else that makes leftists uncomfortable.

Eh, it was worth a try.  Forget it.  No, this makes about as much sense as anything else on the left.  Interpreting the symbolism of this statue is like listening to a Biden speech.