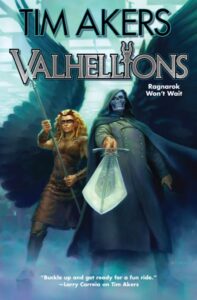 Take a typical college-aged man from the Midwest in today’s America. Give him the ambition to slay dragons and become a knight errant. It is unrealistic, but it is his dream. Then let him discover magic really works. He slays a fire-breathing dragon (with his mom’s Volvo), and is invited to join Knight Watch, an organization dedicated to protecting ordinary Americans from intrusions by supernatural enemies

“Valhellions,” a fantasy novel by Tim Akers, uses this setting. It is the sequel to “Knight Watch,” which introduced John Rast and Knight Watch. John’s dream job is not turning out quite as he dreamed. He has to hide magic from the mundane world which dampens the fun. His parents think he is a highly-paid troubleshooter for a tech firm. (He is – sort of.) The girl he adores, Chesa Lozaro joined Knight Watch as an elven ranger princess (that was her dream). Despite working together, she still disdains him.

If anything can go wrong, it does, especially to John. His life has become a collision between Tolkien and the Marx Brothers, with him playing the straight man. Now the world is about to end. Some renegades at Valhalla are trying to trigger Ragnarok, the twilight of the gods. It is up to John and his team to stop it.

This casts much of the fantastic universe into the mundane world. (John’s magical realm home becomes a shabby suburban tract house and Valhalla turns into a dilapidated Illinois event hall. But John and his team persist, traveling far distances (well, to Minnesota) to save the world. The resulting tale is epic and side-splitting.

“Valhellions” is a fun fantasy romp. Akers keeps things light and amusing. He gives readers a fast-paced adventure, deftly mixing the mundane and the fantastic. If you take a James Bond novel mixed with Tolkien and the Three Stooges (definitely shaken, not stirred) you get “Valhellions.”