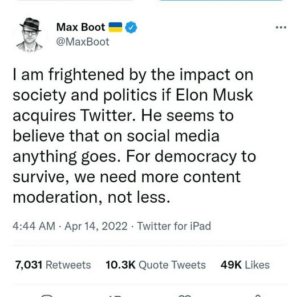 We don’t need to be lectured by enemies of freedom who claim some phony moral principle they hide behind to constrain us. Even if people like Max Boot, Tom Nichols, National Review, and others weren’t the bevy of hypocritical clowns they are, it would still be unacceptable for someone to impose their will on you from doing what you think is right or best. Their hypocrisy is just the icing on the cake.

And then they have the gall to claim they’re for freedom. What freedom? The freedom to get a big gulp and give yourself diabetes! Hell yeah! That’s about as far as freedom goes. What if I want to be free from corporations imposing gender ideology on kids? Nah. Too far. We don’t believe in that kind of freedom. You can go to Disneyworld and gorge yourself on cakes and 40-dollar cheeseburgers in their parks though! Hell yeah!

Is this what all the people who died in our wars died for? The freedom to cut your penis off, but not the freedom to come together and stop a practice we believe is abhorrent? We shouldn’t use our political power to undermine both the economic and political power of those who fight for this ideology? Says who? Last I checked this was a free society. And we can be for any law we want to be for. We can support any kind of politician we want. We can castigate any actor or group of actors we find to be unacceptable. We can be against any kind of practice we find detrimental. I don’t need to be tolerant, because I’m free. And freedom includes the freedom not to tolerate that which I find objectionable.

And we don’t need to be lectured by people who claim every action they take and every thought they have is warranted, merely because they claim their values and principles are the correct ones. And if we don’t agree with them then we have none and should be quiet. We don’t have the freedom and they have maximum freedom to push anything they want to push because they’re the anointed.

The right throws around principle the same way the left throws around racism. Both are meant to silence and stop the seizing power away from people who have presided over 40 years of decay.

There is nothing principled about the current trajectory we are on. There is nothing moral about either party and their terrible members and leadership. There’s no virtue in allowing mega-corporations who got their mega status through special carveouts and favors telling us what we should or should not do as a people. And the people who have anointed themselves the vanguards of this ideology or that ideology, this cause or that cause, this party or that party have no business telling us what we can or can’t do. That it interferes with their little ideology or their little world and it threatens their station is where our freedom meets their limits.