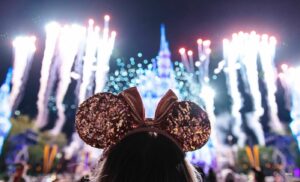 Parents form an important part of Disney’s customer base. Who knew? Apparently not Disney. Having said that, I’m glad to see that the Happiest Place On Earth is doing its part to reassure parents that Disney is again all about wholesome family-friendly entertainment rather than whatever gender ideology happens to be in vogue at any given moment.

Below are nine of Disney’s latest attempts to restore trust. Is Disney still captive to the more wild-eyed elements within its ranks? You decide.

This Swiss-themed rollercoaster fan favorite has been renamed the Matterporn. While the Abominable Snowman remains, he has been renamed the Abominable Snowperson and is depicted grooming a kindergartener who has lost her way while ascending the mountain with her family. The glorification-of-pornography theme runs throughout and upon the ride’s conclusion parents may purchase photos of their terrified children taken mid-ride.

After receiving complaints from no more than two employees, the Haunted Mansion has been renamed the Haunted Person-sion. In an email, a Disney Executive explained that “Our intention is to maintain the fun, spooky atmosphere of the Haunted Mxnsion without minimizing the amazing contributions of women throughout American history.” The two employees are now working to get Disney to revisit its copyright on classic 101 Dalmations and change it to 101 Pronouns.

Snow White and the Seven Genders

Snow White and the Seven Dwarves undergoes a radical plot shift in this classic tale as our heroine undertakes a journey of identity in which she identifies as male, androgyne, nonbinary, cisgender, butch, gender expansive and gender outlaw. The film concludes with Snow White accruing a crushing debt pursuing a Master’s in English which is eventually forgiven in a cameo appearance by President Michelle Obama

The enormously successful film Black Panther has been “updated to reflect modern sensibilities” said one Disney executive, adding that he could foresee a return to Black Panther, but could not rule out future iterations such as Negro Panther or Colored Person Panther.

This heartwarming tale of toys that come to life to help a young boy navigate the challenges of leaving early childhood behind is now a raunchy celebration of phalluses and sexual self-exploration. Disney has vowed to boycott any state which does not march children into theaters to watch.

This new iteration of the Lion King endeavors to replace the patriarchy-reinforcing themes of the original with its father-knows-worst and meat-is-murder motifs.

Cinderella but a dude.

This heartwarming tale of a fish who learns the importance of focus and family is now a celebration of hookup culture and having a short memory.