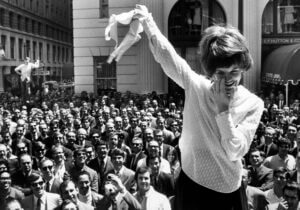 Half a century ago, when I was a young man, you were the ones celebrating individuality and anything-goes self-expression.

Back then, you were the ones burning the draft cards and defying authority. Today you’re a masked lump sitting on an airport bench, scolding with narrowed eyes anyone who delights in the air touching her face. What happened to you?

Back then, you were the ones demanding to be heard, saying the things the establishment didn’t want to hear, speaking truth to power. Today the phrase “free speech” terrifies you, and you offer a dozen excuses why we’re better off muzzled and restrained by those in power, like some kind of pet.

Back then, you cheered a good man as he made a great speech, sharing his dream of a future when what mattered was a man or woman’s character, not his or her skin. He died for that vision, but you lived it. Today you’re demanding segregated events, branding people “racist” for being the wrong color, obsessing about trivial differences as if they alone define a person and give him his worth.

Back then, women burned their bras and roared and you, fists in the air, roared with them: women could do anything and everything. Today you reject the very idea that “women” exist: your Woman of the Year is a man, and men lay claim to womanhood and everything that women fought to secure for themselves.

Dare to stand again for the things you once believed.