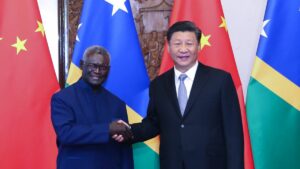 Recent news about the Solomon Islands’ new security agreement with China sent Americans scrambling for their atlases. Not so in Australia, which has been watching this issue closely for years and sees this issue as potentially existential. To understand why harkens back to World War II.

When I was the U.S. defense attache in Canberra, around this time of year I found myself giving speeches and laying wreaths at the annual Battle of the Coral Sea events. To be honest, I had to get a lot smarter on the Coral Sea, as I hadn’t previously assigned as much importance to it as to other Pacific naval battles–Pearl Harbor and Midway, for example. But for the Aussies, who had just seen their primary security partners (the British) surrender in Singapore, the fact the Yanks showed up and stopped the Japanese fleet before it reached Australian shores meant everything, and we became their new best “mates”.

Thus do the Aussies make it a point to remember Coral Sea, as well as the fact that Imperial Japan sought to cut their sea line of communication (“SLOC” in military lingo) to the US by taking the islands that lay along it. That’s why rumors of a Chinese base in Vanuatu four years back — barely noted in the U.S. — constituted a five-alarm fire for Australia.

Since that time, both the U.S. and Australia have increased their attention to the South Pacific islands, though in very different ways. The U.S. has largely concentrated its efforts on the Compact States, with which we have our own security agreements, while letting Australia take the lead for those places closer to its shores. This was for two very simple reasons: (1.) we can’t be everywhere (we don’t even have an Embassy in the Solomons at present), and (2.) Australia just knows these places better.

The basic problem, simply put, is that Beijing practices a corrupt form of diplomacy called “elite capture“, which is simply the willingness to pay bribes to a country’s decision-makers, a phenomenon last reported when the government was enticed to switch diplomatic recognition from Taiwan to China in 2019. In fact, when 60 Minutes Australia sent a camera crew to the Solomons that same year, they found leaders willing to talk on camera about the Chinese bribery attempts they’d personally experienced. Prime Minister Sogavare knows his people aren’t exactly crazy about relations with China, but Beijing knows he likes money, so …

Australia isn’t done, and may yet avert a Chinese military base. Just last year they provided the Solomons new patrol boats under a successful program they’ve run for three decades with nearby island nations. This book is far from written, but the opening chapters have been ominous.