That’s the glorious Victory Day in Russia, celebrating the defeat of Nazi Germany. The very great and completely correct architect of the special military operation would like to have the pelt of a pacified, defeated, “deNazified” Ukraine to wave from the viewing stands, but there are problems.  I’m sure he’ll come up with something to satisfy the Z-ombies, but there have been troublesome developments at home. Lots of explodey moments in the last few days:

Large fires have been reported at an oil depot in the Russian city of Bryansk, which is approximately the halfway point between Moscow and Kyiv. Multiple explosions were reportedly heard, but there’s no evidence of an attack from Ukraine into Russian territory.

The smoking lamp was off, Ivan. C’mon.

Huge plumes of smoke can be seen rising above the Dmitrievsky Chemical Plant in the city of Kineshma, which is around 250 miles east of Moscow. According to the company’s website, the plant is the “largest producer of butyl acetate and industrial solvents in Russia and Eastern Europe”.

It’s the biggest plant in Russia. They need that stuff.

Seven people have been killed after a huge fire broke out at a key Russian defence research institute in Tver, north-west of Moscow, according to reports.

The fire erupted in an administrative building of the aerospace defence forces’ central research institute, which operates under the Russian defence ministry. It quickly engulfed the building’s upper three floors, forcing those inside to jump from windows and causing the roof to cave in.

Photographs of the main building showed it completely gutted by fire.

This doesn’t include the explosion at the fuel depot supplying the invasion force, attributed to Uke action. Of course, it’s a big country, and things explode every day. These things wouldn’t have been big news before, because who cares if systemic corruption and laxity crimps their paint thinner availability. But it matters now, in the teeth of a war, because it raises the specter of devious Uke Ninja saboteurs, or domestic wreckers (unlikely), or an opportunity for Mr. Sour to blame lousy safety and fire-suppression on the perfidious alliance devoted to humiliating Russia. Some shout “False Flag!” But that’s nonsense. Why would Putin take out a strategic asset when he can blow up an apartment building in Moscow and get the same outrage?

Meanwhile, in other completely coincidental news:

Two Russian oligarchs, their wives, and their children were found dead just a day apart, prompting police investigations into whether the incidents were suicides or a result of foul play.

Vladislav Avayev and Sergey Protosenya were found dead in their homes, with officials suspecting domestic disputes in both cases, according to reports from local outlets in Russia and Spain. Each was framed as a murder-suicide, police said, although that is not confirmed at this time.

You wonder whether this was indeed a domestic matter, or the FSB nipping a plot in the bud with the extra violence to send a message.

May 9th will be interesting. 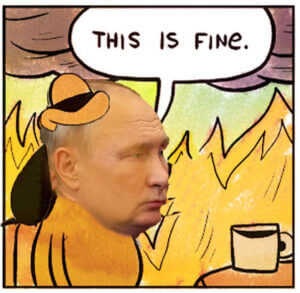