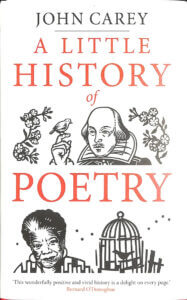 Poetry is the oldest of the language arts. It predated literacy. Its cadence, rhythm, and rhyme allowed complex things to be remembered.  When literacy emerged, the earliest literature recorded was poetry.  Today prose has displaced poetry from primacy, yet poems remain important.

“A Little History of Poetry,” by John Carey is exactly what its title promises – a short history of poetry, written for a general audience.

Carey starts at the beginning. He opens the book with a discussion of the oldest recorded poem, “The Epic of Gilgamesh.” Written over 4,000 years ago it was preserved on clay tablets. He ends it with poets of the 21st century, many as unknown to today’s general public as Gilgamesh. Along the way and in between he makes a brief stop examining virtually every type of poetry and their poets.

This book explores the basic Western canon. There are occasional excursions into Oriental and African poetry. He has a chapter on Russian poetry and another on Japanese and Chinese poetry. Most of the book focuses its attention on the poetry of Europe. This makes sense. A survey of the history of poetry written for an English-language audience should focus on English-language poets and on the poets who influenced them. That means classical Greece and Rome, and Medieval Europe.

Although the book spans most of history, Carey spends most of his time in the modern era. He captures the early greats, including Homer, Dante, Chaucer, and Milton in the book’s opening chapters. Two-thirds of the book covers poets of the 18th through 21st century, with over half of that on poets alive after 1900.

For those unfamiliar with poetry, including those who have avoided it since escaping high school, this book offers an excellent – and fun – refresher. As with other books in the “Little History” series it is written for an everyday reader.  Carey knows his subject, but is not out to intimidate readers with his expertise. Rather he writes as an enthusiast wishing to share his interest with others. He shows why he likes poetry, and why it captures his attention.

“A Little History of Poetry” offers readers a useful introduction to poetry. Readers may not agree with all of Carey’s judgments, but taste is personal. Read it.  It will remind you of poets you may have overlooked or forgotten or introduce you to poets previously unknown. It might even renew your joy with poetry.