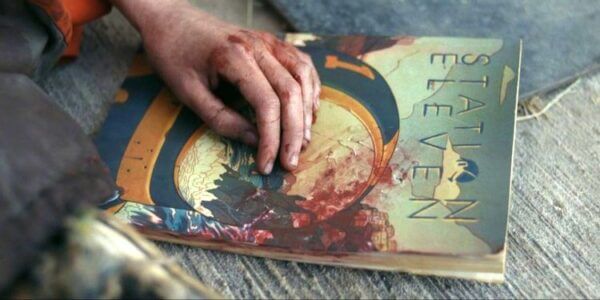 I’m not sure if how long it’s been since I’ve seen something as funky as HBO’s miniseries Station 11. I couldn’t really say with confidence that I liked it, and describing it would be an even more challenging endeavor. But the overwhelming critical praise it’s received isn’t something I’ll debate now. At Rotten Tomatoes, the paradoxically titled “Critics Consensus” runs as follows: “Station 11 rewards patient viewers with an insightful and thematically rich assertion that–even in the post-apocalypse–the show must go on.” In this instance, I can live with a product of the Tomatometer.

In a very confined nutshell, the show concentrates on a group of touring Shakespearean actors who ritually circle the Great Lakes… in the immediate and intermediate years after a swine flu pandemic effectively wipes out the world as we know it. The show also includes, among other things, a large cluster of survivors isolating in the fictional “Severn City” regional airport; a creepy prophet dude in overalls who’s manipulating children into suicide bombings; a former movie star, who, even after a relatively unrelated death, manages to be central to the whole story; and a graphic novel, the eponymous Station 11, about an astronaut trapped on a broken space station.

Yeah, it’s weird. And that’s about as much as I can expand on without getting lost in the weeds of unnecessary, and bespoiling, explication. The show opens during a production of King Lear, on what we’ll discover is Day One of the (practical) end of the world. We meet our incidentally conjoined protagonists: a down-and-out tabloid journalist named Jeevan, whose single talent is an instinctual urge to stand up; and a young actress named Kirsten, who we’ll find is able to play the roles put in front of her. Almost all is lost quickly: broadcasts, cell service, electricity… even Wikipedia! Most everything is gone; except Hamlet.

The series utilizes tonal shifts that are downright stupefying; moving almost seamlessly from the horrifying to endearing cutesiness. In other words, it’s fitting for the age of Twitter and Instagram. And when we move into the future–roughly 2040–Station 11 stands out from the otherwise cliched dystopian genre by revolving around people who lived in, and through the dreary end, of what could be called a fairly pitiful era: The age hominem hermitus. And yet, despite the frank portrayal of mostly enfeebled adults, the show finds something worth rescuing.

Production started in January 2020, meaning the series was well into development before Covid-19 came on the scene, and production was at least as hampered by our mild pandemic as it likely benefited from its supposed ‘timeliness’. To their credit, they seem to have added little to capitalize on the developments that they could have. They even handled the now typical diversity quotas with enough skill that, even on life support, she feels like America the Extraordinary rather than America the Try-Hard.

As far as whether I’d recommend it, that’s a little complicated too. The piece of pop culture that comes to mind is Paul Anderson’s unevenly accepted Magnolia. Like the perpetual Oscar nominee’s San Fernando Valley epic, Station 11 is messy and meandering while simultaneously trying to connect a few too many dots. Whether the haphazard ploys with scattered timelines is an adherence to, or a deviation from, novelist Emily St. John Mandel’s novel of the same name, I couldn’t say. One suspects sequences could’ve been handled with better care, or occasionally cut altogether. But… like the secular Anderson’s three hours of pondering God–or, for that matter, the works Station 11 keeps alive– there’s something to be said for contemporary fiction that succeeds in finding beauty amid a heap of tragedy. It identifies something marvelous in the desire to create, along with the indispensability (and the adjacent folly) of preservation.

Yes, civilized humanity survives the quasi-apocalypse! That alone might make the show worth a look.