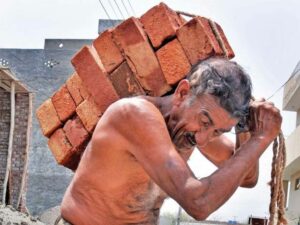 Once again, I was blessed to spend Passover with the @iwe family this past week. And as always, I loved the experience. Of course, key to our celebration was embracing the Exodus from Egypt as if we had made the journey with the Jews when they escaped Pharaoh’s tyranny. As I contemplated the gift of freedom, I realized that we are struggling with the issues of freedom and enslavement in our own time.

Only instead of reveling in our joy of living in a land of freedom and opportunity, we are going backward.

We are returning to the bonds of our past.

We are returning to the slavery of Egypt.

Let me share the parallels that occurred to me when looking at the Exodus of old, and our circumstances today.

When the Jews left Egypt with Moses, it didn’t take long for them to become disillusioned and unhappy with their decision. They regretted leaving the predictability of their conditions, even though they were enslaved and mistreated. Some of them declared that they wanted to return to Egypt, regardless of the consequences. Their fear of the future also fired up their regret.

Today, we complain about the absence of an ideal society. Instead of focusing on the gifts we enjoy, including material wealth, there are those who accuse our citizenship of being racist and greedy. Too many people want to try, again, to resurrect the disastrous Marxist governance. Or they want to essentially return to the leadership of the elite while whittling away at our freedoms (remember King George III?) Or they gradually implement the Great Reset, trying to blend us with the international community, rather than supporting the uniqueness and leadership of our country. Many in our country are regressing to failed and dangerous ideas.

The Jews had little understanding of how to exercise their freedom on their journey. They lacked food. They lacked water. And they didn’t trust that G-d would step in to help them—so they complained even more. The idea of agency had no place in the beginning of the Jews’ journey.

In our times, people focus on the expectation that government will take care of them. Welfare checks, COVID checks, relief checks will arrive on a regular basis to not only take care of us, but to make the pursuit of work unnecessary. We are plagued with apathy, indifferent to the values of learning, growing, and contributing. Too many people are unconscious of their own power or could care even less.

The Jews had escaped the culture of idol worship, which was embedded in Egyptian culture. And yet they made the Golden Calf on their journey, the epitome of primitive worship, disregarding their commitment to G-d. They were driven by their fear of being without Moses, and looked for a symbol of connection.

Today we have our own idols: commitment to equity, diversity, and inclusion, and their accouterments. Those who embrace these ideas expect everyone to bow down to them, and when they don’t, they are punished or condemned.

The promise to Abraham, to not only multiply the Jewish people but to lead them to a land of their own, seemed to be lost in the demands of leaving Egypt. At least temporarily the Jews had forgotten their history; the degree to which the story of the future survived their 400+ years under slavery is unclear. During the Exodus, the Jews were narrowly focused on the journey and their survival. Their history, which was such a significant part of their story, was put on the back burner.

In this country, we are not only losing our history and its significance, but some people have chosen to distort and misrepresent the story of our founding in tragic and treacherous ways. The history they try to present is one of decadence, greed, and hate. And we have, up until now, been unable to stop them.

The Jews were continually reminded of G-d, His presence, and His intervention to protect them when they left Egypt. They were given laws to live by, to remind them that they were a chosen people, that they were to strive to lead holy lives, and had a responsibility to be a positive example to the world. And yet they repeatedly disappointed G-d, disregarding His guidance.

Today people are ridiculed and denigrated for their belief in G-d and their practice of faith. The “new religion” that has emerged has a cult-like quality, demanding allegiance and practice of its tenets. Those who do not join in are marginalized and excluded by the true believers. Respect for the rule of law is disappearing all over the country. Criminals are shown more consideration than their victims.

We are also reminded repeatedly that we are no better than any other country; in many respects, we are told that we are worse than the rest of the world, regardless of all the evidence to the contrary.

In many respects, people have chosen to live according to the new rules of society. Only the rules are not new. They have emerged from a primitive, unrealistic, and selfish mindset that demands relinquishing our freedoms and complying with the expectations of the elite. Although the elite insists that they are progressing, improving upon, and replacing a belief system that has produced, in my estimation, the greatest country in the world, they are lying and intentionally misrepresenting their actions.

We are not a better society. We have become more narcissistic and lawless.

We have chosen to return to the slavery of Egypt.