From the head of a  think-tank, recent thoughts on Ukraine’s disinclination to be absorbed:

This is not an uncommon view, also expressed the other day by Noam Chomsky: it was unwise for Ukraine to resist invasion. If Russia wants your territory, you assume a supine position while gesturing broadly towards everything that was once yours, and is now theirs to control. If Russia is required to kill your people and level your neighborhoods to get what it believes is theirs, that’s on you.

Freedom is nice and all that I guess, but economic growth is the true metric of a society’s health. Really, those idiots in the tractors, do they care who the boss is? The tech sector of Ukraine – does it matter if they’re making West-facing consumer products, or working for the FSB? What counts is the end-of-the-year balance sheet. 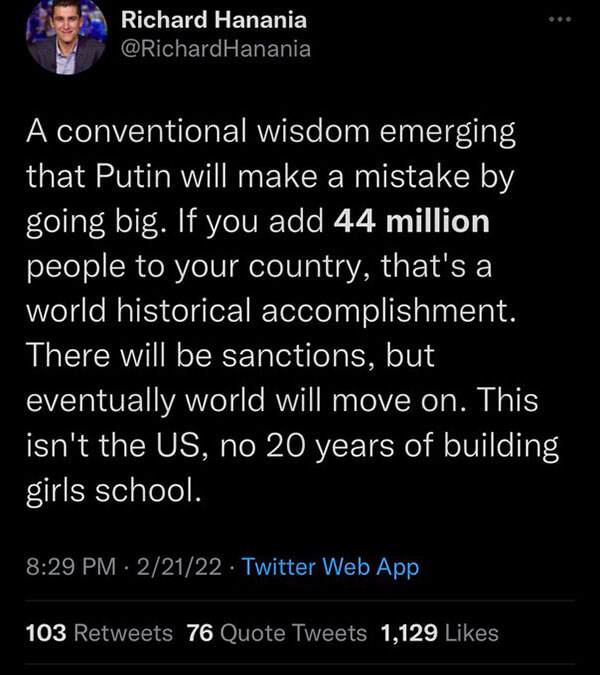 The means by which you add those 44 million are irrelevant. What counts is the world historical accomplishment.

The population of France in 1940 was 41 million, and I suppose absorbing it into the Reich was a world historical accomplishment, but history doesn’t seem to regard it with any particular affection. On the other hand, France did surrender, and while that made things difficult for the eventual defeat of the militaristic statists in Berlin, France was spared additional physical trauma. Except for the Jews, of course, but (bored continental hand-waving gesture) 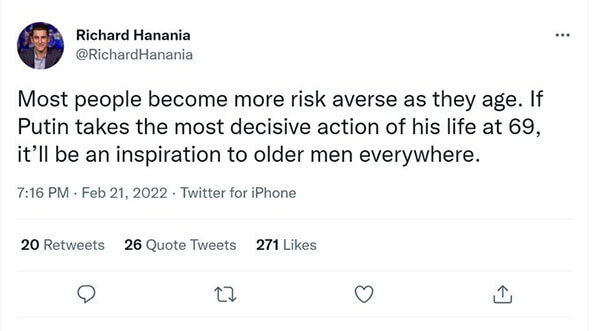 Men of a certain age of Ricochet: did you find a spring in your step after the invasion? Perhaps a sudden urge to make changes, act boldly? Did you feel a strange charge in the older-dude zeitgeist, as though men around the world about to walk over the border of 70 suddenly felt empowered and revivified?

Perhaps, because that Putin guy is a strong leader, and cares for his nation, unlike our guys. Granted, he’s presided over the wholesale transfer of wealth from his people to a select group of elites, and the craptacular state of his military suggests that he was either ignorant of the true state of his capabilities or uninterested in the human cost of shoving his shambolic forces into the meat grinder, and hey maybe the Defender of Christendom shouldn’t have lost a purported piece of the True Cross because his flagship wasn’t refitted because they were broke but  the oligarch’s yachts had 5G and Roombas in the master suite. But at least he’s not woke. And it’s ridiculous to think he’s not strong. Just you wait. He’s going to kill a lot of people.

That’s what leaders do.