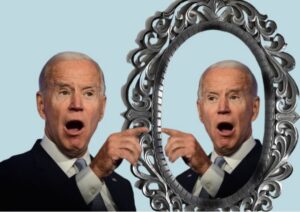 It is amazing.  Certain politically pregnant phrases are repeated nearly verbatim, over and over by a multitude of pundits, politicians, news anchors, podcasters, talk show hosts, etc.  It’s as if they’re all reading from the same script.  (They are.)  The worst of these is the declaration of a “threat to our democracy.”  It’s as if this is the definitive, final, word.  Except that they all must say it, just in case it didn’t quite take in first time. Just in case we didn’t hear it.  Just in case someone, aghast, challenged the idea of it, declared it not just unoriginal, but also just plain wrong.

Challenge is an ugly thing.  It is “a threat to our democracy!”

Take “climate change.”  Solving it is the new prime directive.  The entire federal bureaucracy, from end to end, marches in lock step with this one goal.  “Climate change” we are told is an “existential threat to human existence.” And yet there is much evidence that climate change is nonsense, naïve, stupid, or far worse.  As predicted catastrophic events fail to materialize and are re-predicted; as contrary evidence mounts in opposition and is repressed, irrational, unimpeachable faith in climate change survives; the drumbeat for dramatic action to counter the threat must continue and accelerate.

Let no crisis pass without advantage, even if it is entirely imaginary.

The climate does change, by the way.  It always has.

“Equity” is another pillar of this “reimagined” post-constitutional “reality”.  It does sound good.  Equity.  Kinda like “all men are created equal.”  However, “equity” is nothing like equality under the law.  It assumes the false and Marxist idea of economic outcome, where zero-sum economic gains are garnered by repressors and generationally denied the repressed.  In its current iteration, the repressed are not workers, but disadvantaged people of color.  The repressors are racists, specifically whites.  The solution is wokism, leniency for the repressed, redistribution of wealth and power to the disadvantaged and yet more discrimination, this time aimed at the repressors.  Wokism is an insidious idea, wrong in so many ways.  I cannot think of any political ideology as corrosive as this.  Yet Democrats religiously embrace the idea as a primary and organizing principle of their governance, as their raison d’etre.

A third priority of the Democrats’ current and tenuous post-constitutional authority is the elimination of borders, hence of nations.  There is something naively romantic about the idea of no borders to the nascent libertarian, but it also fits into the “equity” worldview, where the repressed seek recompense from wealthy, successful nations by invading them en masse.  I’m afraid, though, this is more of a pragmatical, political calculus.  Democrats in power view these new immigrants as a new political, even if illegitimate, base, as future dependent and grateful Democrat voters.  Democrats know that many states do not require proof of citizenship to register to vote.  To further confuse matters, some local jurisdictions in Democrat-run states even allow non-citizens to vote in local elections.  It is not difficult to see how this could lead to confusion, to illegal voting by non-citizens in Federal elections, a practice very difficult to detect and impossible to correct once it occurs.

One thing about blind Democracy.  The only way to ensure its integrity is to prevent corruption before a vote is cast.  Corruption can be detected – observed, deduced, proven even, as when votes tallied do not match votes cast, when the number of mail-in ballots tallied exceeds ballots mailed or when mail-in ballots are counted even before they are franked by the Post Office.  But there is no remedy when voter fraud is detected, other than to throw out the entire vote and begin anew, an unlikely and unsettling outcome fraught with political distrust and peril.  Voter fraud and corruption must be prevented.  And the only way to do that is to control the process.  Democrats know this and have dedicated themselves to doing everything in their power to characterize sound, common-sense election fraud prevention policies and practices as deliberate “voter suppression” tactics and inherently racist.  This is why Democrats have attempted an extra-constitutional federal takeover of the local voting process.  For them to retain power, the vote must continue to be loose and unaccountable.  Otherwise, it cannot be rigged.

So if you ever wonder what our federal government’s current priorities are, what the Democrats and Joe Biden are trying to accomplish, it is thus: push all-in on the dubious, ethereal threat of climate change at all costs, promote Wokism and “equity” as the primary and organizing principles of all federal policy, and open our borders, which when combined with unaccountable elections, will allow the Democrats to retain power despite the disapprobation of the electorate.

So what exactly are these “threats to our democracy” we keep hearing about, words echoed among prominent Democrats, leftward pundits, and their leftie supporters in the media?  It’s not democracy they are worried about; it’s power.  They are about to lose it, and rightly so, for pushing something so stupid as their profligate climate change policy, for embracing Wokism, for allowing unfettered, illegal immigration, and for promoting unaccountable elections.

Here is something for Democrats from Disney before it became all Woke: “Mirror, mirror on the wall.  Who’s the biggest…” to which I add, “threat of all?”