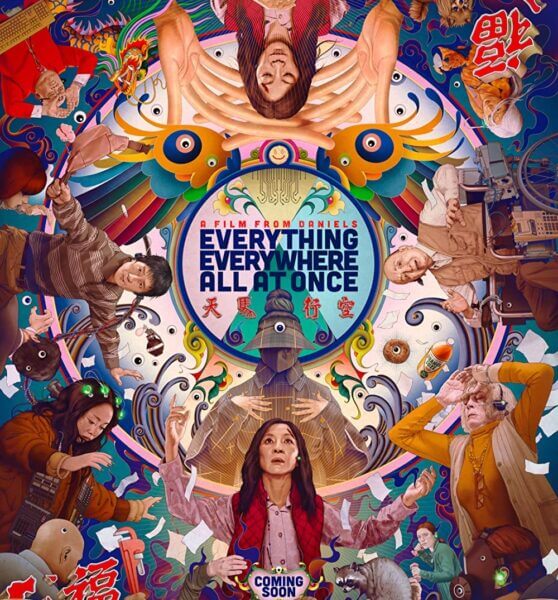 At the IRS office, Evelyn gets roped into an interdimensional conflict. She is informed she is one of many Evelyns. The Evelyn from the Alpha Universe was the first person to discover a method of traveling between universes. That Evelyn is recruiting this Evelyn to combat the villain, Jobu Tupaki, a being who experiences all parallel universes at once and is a threat to the entire multiverse. As confusing as that synopsis is, the movie is not hard to follow. For all its elaborate plotting and its temporal and spatial anarchy, EEAaO keeps the viewer in the loop and does so without a condescending amount of exposition. You’re never more confused than the characters are. 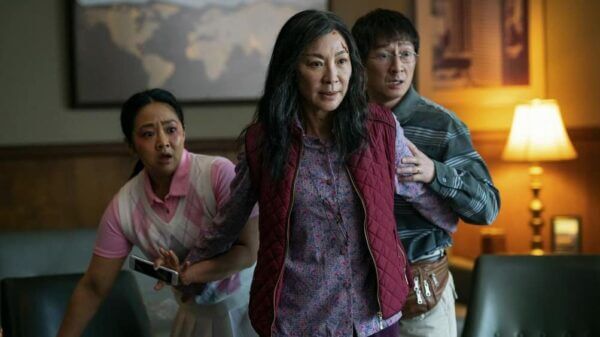 The movie was directed by Dan Kwan and Daniel Scheinert known mononymously as Daniels. Their only previous feature is Swiss Army Man, in which a man played by Paul Dano escapes a deserted island with the aid of a farting corpse played by Daniel Radcliffe. I have not seen Swiss Army Man on the basis no movie could live up to such a premise. Daniels like their high concepts, but they know ideas only get you so far. Anyone can come up with good ideas. Consider the 2019 indie movie Mega Time Squad. It’s about a small-time crook who gets his hands on an amulet that lets him travel back in time fifteen minutes, each time creating a copy of himself. He uses these copies to create a gang to pull off heists. A brilliant concept for a story. It starts off fun, then you realize the writer never got further than the initial idea and wasn’t going to exploit the premise for the various bonkers possibilities it offers.

The Daniels don’t introduce an idea without exploring its sundry implications. Maybe because comedy plays such a big part in their movies, they understand the importance of paying off what you set up. Getting back to EEAaO, there are technicians who look up the quickest ways one can channel the abilities of their selves from other universes, like having to make paper cuts between your fingers to gain the spryness of yourself from a universe in which you were a gymnast. I won’t spoil the many methods to initiate this “verse-hopping” as they call it. I’ll only say that two characters merely glancing at an object leads to the biggest laugh in the movie. 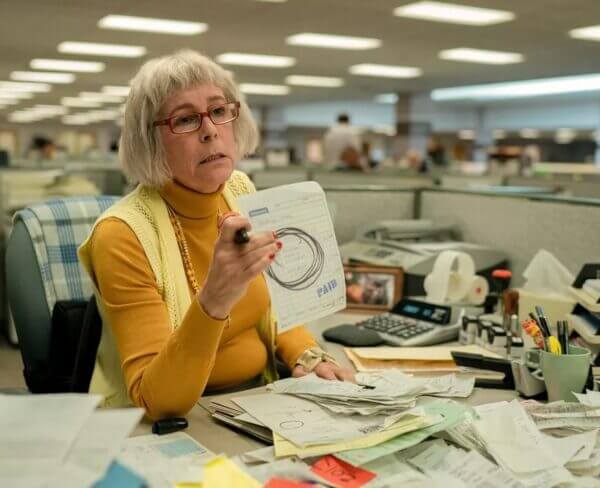 Jamie Lee Curtis is near unrecognizable as Deirdre Beaubeirdra.

A plot this zany—and trust me, I’ve barely touched on the zaniness—requires superb performances to maintain some semblance of reality. Michelle Yeoh is the heart of the film. She portrays Evelyn as frazzled and so put upon you can’t help but root for her even while realizing she’s stubborn, oblivious to her husband, and clueless with her daughter. It’s great seeing this legend of Hong Kong cinema get her dues, and at 59 she still carries an action scene. Ke Huy Quan plays Waymond as her equally flustered spouse, and switches to an ultra-competent take on the character when he plays the version from the Alpha Universe. Quan played Data and Short Round in The Goonies and Indiana Jones and the Temple of Doom respectively. It would’ve driven me nuts had I not known that beforehand. The most surprising performance comes from Jamie Lee Curtis as an IRS agent. It’s not surprising because it’s good; that’s a given. It’s surprising because I had no idea it was Curtis until the end credits.

Everything Everywhere All at Once loses some steam about halfway through once it can no longer run purely on manic energy and novel ideas, and must delve into its central drama which is Evelyn reconciling with her daughter. The emotions are laid on thick. It’s hard to complain, though. Here’s a new movie that’s not based on an existing IP, respects the audience’s intelligence, is boundlessly creative, and yet is a humble martial arts comedy with wide appeal. Consensus is rare in this business, but believe me, everyone is right: this movie is good. And as far as learning about the multiverse, it beats sitting through a Michio Kaku lecture. Hell, I’m warming to multiverse theory myself. Now if only I was in the universe where the couple next to me in the theater kept their commentary to themselves.

Published in Entertainment
Tags: Comedy, Daniels, Everything Everywhere All at Once, Martial Arts, Michelle Yeoh, Multiverse