This is, or was (heh heh), the Moskva. Last time I saw her she was still calling herself Slava. 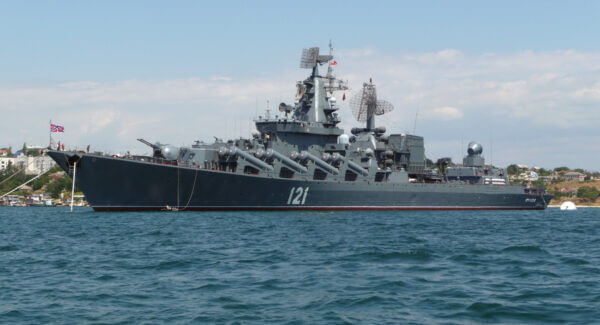 The best version of the story I’ve heard is that the Ukes distracted this sophisticated warship, bristling with radars,  with a drone decoy while they put a couple of homegrown cruise missiles into her. I hope it’s true. Good shooting, guys.

Ships die from fire. Moskva probably took a hit in one of her many magazines; the Reds are calling this an “ammunition explosion.” Ok, so now she’s a wreck inside – you have to put out the fires and control the flooding. Damage control has always been the USN’s other secret weapon, right beside underway replenishment. The Red Navy was never known for the quality of its sailors – so they probably never had good DC.

We weren’t afraid of Slava; her radars were primitive then too. Those city-bus-sized missiles are fast, but fat targets for an SM-2. But we were grateful after the fall of the USSR that we wouldn’t have to run that live test.

Russia’s navy sucks, that’s obvious. How bad does the CIC have to be to let two vampires in? Moskva had plenty of short-range missiles and close-in defensive guns, not to mention all the radar Russia can muster. But the most telling thing is they evacuated the crew.

You can read up on the Slava cruisers at Wikipedia, where the photo above links. Just like the Sukhoi, the Russians do build them pretty.