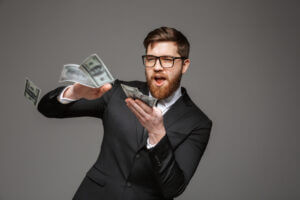 Loma Verde, CA, is building a $24 million recreation center with a pool. Forest Lakes, MN, is getting a $1.5 million golf clubhouse, while San Antonio is purchasing a $15 million theme park. These may seem frivolous when rampant inflation is threatening, but never mind, they’re all “free,” a synonym for “paid for by the feds.”

America is awash in cash. Hundreds of other communities are enjoying similar goodies. States in no fiscal difficulty whatsoever have been given billions in budget boosts. Checks for thousands of dollars have gone to citizens not even claiming to be in need.  Millions of Americans receive enough government cash that they can now avoid the inconvenience and degradation of work.

These are outcomes from President Biden’s $1.9 trillion dollar American Rescue Plan, although the link to Covid may seem obscure to some. But the bigger point is that our governing culture today sees government spending as a positive good, which may be prompted by any excuse or none at all.

This is a continuation of the age-old argument over the role of government. For those who see government as a benign force that can efficiently, by use of its taxing power, address the common welfare and assure equitable outcomes, every dollar transferred from private to public hands is a positive.

Moreover, Big Government clearly increases the power and prestige of government officials. It creates beneficiaries highly likely to vote for those politicians who “cared” enough to send Other People’s Money their way.

Vastly expanded government has also affected the attitudes of Americans toward the role of government in their lives. To an extent unthinkable to earlier generations, Americans now assume the federal government will take responsibility for such matters as healthcare, education, childcare, and aging parents.

The founders of our Constitution would not be pleased. Their original intent was to create a more just and independent society than the autocracies which had plagued mankind for millennia. Regrettably, Americans have blandly looked on while much of their birthright has been stolen.

Much of the recent confiscation of our nation‘s economic output has come under the pretext of Covid spending. But remember that the Covid financial crisis was a self-inflicted wound. The lockdowns were unprecedented and proved ineffective as a pandemic response strategy, but they precipitated a huge expansion of government power.

America has so far spent $6.4 trillion in Covid relief bills. The $1.9 trillion in the 2021 American rescue plan alone was enough to buy every Covid vaccine, ventilator, and hospital in existence. But much of the money went to beyond-obvious pork and to support Democratic political constituencies.

New York, among others, is reportedly sitting on $12.7 billion in unneeded Covid funds that they hope will revert to “unassigned” dollars. The money was pushed out so carelessly that the Labor Department IG estimates $163 billion of the $872 billion in Covid unemployment funds were dissipated in fraud.

The consequences of all this unnecessary spending are predictable and enormous. In 2009, then-President Obama warned against continuing deficits when the debt had doubled from $5 trillion to  $10 trillion under his predecessor.

It was $20 trillion by the time he left office, stands at $30 trillion today, and will reach $45 trillion by 2032 according to Biden’s own budget projections.

But trifles like stifling debt and lack of need can’t suppress the political urge to spend. With Covid receding and no extraordinary expenses pending, Joe Biden’s new budget proposal rings in at $5.8 trillion, fully 31% higher than in 2019.

Federal revenues rose 18% in 2021, then 26% this year but it’s not enough. Biden‘s $2 trillion projected deficit means the debt will have climbed $7 trillion in just the last three years. Multi-trillion dollar deficits have effectively been normalized.

It could be worse. We narrowly escaped passage of the $3.5 trillion Build Back Better boondoggle. Yet now Biden has the gall to demand $30 billion more for Covid expenses when at least $500 billion from the last Covid relief bill is still unspent.

The mindless, immoral imperative to spend more knows no bounds. Time is running out to reverse course. When will we come to our senses?