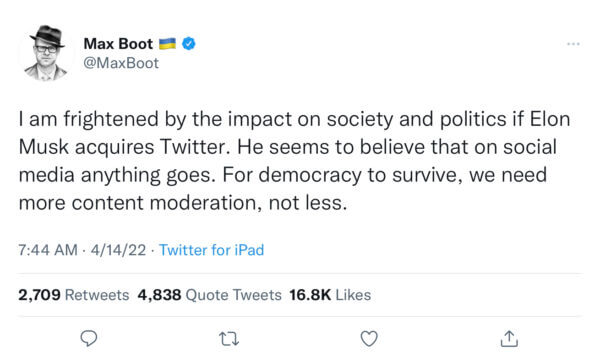 What is this “democracy” that Max Boot seeks to protect? It seems undeniable that his understanding of “moderation” includes the elimination of “content” (even if completely accurate) that puts left of center political interests and candidates in a bad light. The thin pretense that Boot is deeply committed to the truth is part of the same vision animating Nancy Pelosi’s claim that legislation intended to make election cheating vastly easier is needed to “save” democracy.

The weird use of “democracy” here is more than a cynical attempt to gain an electoral edge for one side. There appears to be a coherent tacit redefinition of “democracy” at work:

Voting is meant to be an opportunity for the people to affirm the order established by the right sorts. If the people are disappointed in the regime, they can vote for and even occasionally elect an acceptable “protest” candidate like Romney or McCain. If the people or their elected representatives fail to implement some measure necessary to sustain “progress” then the federal courts must discover some previously unknown provision in the Constitution to mandate its implementation. Bureaucratic inertia grinds on in service to the preferred order.  “Democracy” is the entire system devoted to the imposition of a social, political, and economic order consonant with the sensibilities of a self-identified ruling class. Anything that disrupts that is “undemocratic” even if it a large majority supports the disruptive position.

The suppressed Hunter Biden laptop story was not just a threat to a preferred election outcome but personified corruption and privilege providing enormous wealth despite a complete absence of both competence and personal honor. Hunter Biden is Boot’s “democracy” and was entitled to elite protection out of necessity. Anne Applebaum declared that her disinterest in the story was sufficient grounds for its suppression. Take a moment and reflect on the level of self-regard required to generate and then express that thought without embarrassment. “Democracy” is the property of such people.

Bogus ballot harvests and Soviet-style content manipulation in service to spectacular incompetence, gross self-dealing, judicial imperialism, and intellectual bankruptcy is not a sustainable system, especially if democracy manages to intervene.