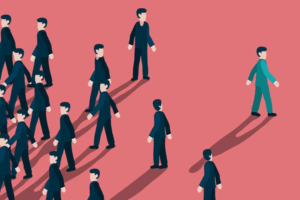 “What happened to that guy?” A lot of us have asked this question in the past few years about columnists, pundits, and thinkers we’ve always agreed with, only to see them taking a wildly different tack. Next, we’ll ask, “Did I change or did they?” I know I’ve changed quite a bit, but to see influential conservatives pushing “the conservative case for voting Democrat/Promoting CRT and Queer Theory/censoring Republicans/etc.” remains tough to stomach.

Many blast these (former?) conservatives on social media, but that’s never been my style. I expect people to disagree with me on most issues; a round of insults won’t change their minds anyway. Our discourse is too toxic as it is, so I’d rather promote the good and beautiful (i.e., my own brilliant ideas) than curse the infidel.

Yet, I can’t help but wonder what happened to so many influential commentators. “Trump broke them” is an easy out, yet doesn’t explain the ideological 180s they’ve taken. I’ve begun to settle on another cause, especially among newly woke-ish Christian writers. A recent interview tied a bow on my thoughts.

Author Paul Kingsnorth has made a fascinating journey over the past few years. He rose to prominence as a dedicated environmentalist, calling for an end to the capitalism that was destroying the planet. Raised an atheist, he later sought answers in Buddhism and Wicca.

Then, almost against his will, he entered the Orthodox church. By then, he was living a humble life in rural Ireland with his family and began reconsidering all his beliefs. This week, toward the end of an interview with iconographer Jonathan Pageau, he said the following (1:17:00 timestamp):

We can’t afford to be respectable.

Christ was not respectable. None of his disciples were respectable. You can’t be conformed to the world because this is where the world is going. You have to be prepared to be all the things that Christ told you were going to be, rejected and humiliated and attacked and all the rest of it. Not for the sake of it, just because you’re being a contrarian…

There’s a lot of renunciation that has to come. That will be different for different people but that’s the hardest bit for those of us who come from comfortable countries.

There’s a renunciation involved, whether it’s reputational or physical or material. And that’s what the interesting people always do. The marginal people who can bring the wisdom back into the center. There’s a need to renounce and to walk away before you can see what the next stage of the path is.

This, of course, applies to Christians, but also to anyone seeking capital-T Truth.

Going against the grain is essential when the grain is heading the wrong way. Disputing the official narrative soon follows. Standing athwart The Current Thing and rolling your eyes comes next.

The resulting mockery will be swift. Why didn’t you post the black square on Instagram? Why aren’t you wearing a mask in your profile pic? Why don’t you have a Ukrainian flag next to your screen name? All the respectable people do that! When you shrug off the feedback, you’ll be labeled a racist, anti-vax Putin fan.

Some get offended by this treatment. The rest of us are bored by it.

Perhaps if you’ve made a lot of money, sold a lot of books, need to curry favor with media moguls, and have grown accustomed to a certain level of material wealth and social influence, these attacks spook you. After all, you have to pay for the house, the cabin, and your kids’ private school.

Or you’re less materialistic yet thrive on the speaking invites, conferences, and Beltway social connections. You think the primary goal of life is to be “nice” and “respectable.” Abandoning that belief horrifies you.

The rest of us no longer care about being respected, especially by people who despise us. We expect the insults, the bad-faith arguments, and attempts at cancellation. When attacked on social media, the only passion I can gin up is clicking the “mute” button.

In the near future, most of us expect the attacks to get worse. I’ve assumed for years I’d be kicked off social media and am surprised it hasn’t happened yet. Who knows, in five years (or five months), we could lose access to our finances. The stuff I write is worse than honking a horn in Ottawa and look what happened to the truckers.

We live in a censorious, conformist age and I remain terrible at following orders. So, I expect the worst and speak my piece anyway. Because when you see the world going to hell, someone has to speak their mind.

What’s needed today are truth-tellers. We can no longer afford to be respectable.