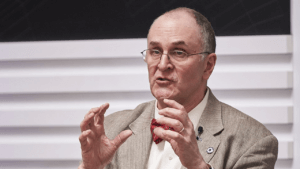 Eliot Cohen is a Never-Trump, former Bush Administration State Department official who was interviewed on the “Limited Liability” podcast released April 13 by Jewish Insider. Assessing the situation in Ukraine, Cohen heavily criticized all three of the post-Bush 43 Administrations. But this quote is what stood out for me:

The Trump administration was very peculiar in that it was a little bit like 18th century France, you know, where the king had one foreign policy and the, you know, foreign policy establishment of the time had a different foreign policy, sometimes diametrically opposed. And, you know, I think it’s fair to say that a lot of the, you know, sort of the H.R. McMasters and John Boltons in this world were actually resolutely anti-Russian. Trump was not. Trump was pro-Putin. (27:42 to 28:08)

Neither of the hosts, former Trump official Rich Goldberg or former Obama official Jerrod Bernstein, pushed back in any way. And that’s appalling in and of itself. A statement such as this shows that, according to the foreign policy “experts,” the President of the United States should have no say in the policy of the country he was elected to lead. As long as there is a “consensus” among the elites, the opinions of the President and the people are irrelevant. (And that’s not even touching on the veracity of the “pro-Putin” remark.)

So, as the Never-Trumpers drone on about “saving our democracy,” I ask “What democracy?” I certainly do not support giving any president of any party a blank check. But shouldn’t all the checks on the Executive come from the co-equal branches of the government and not from within the Executive Branch itself? If the President of the United States has no authority over his own constitutional branch of government, why have elections in the first place? We can just as easily autopilot ourselves into WWIII, no?

People like Cohen expect the President to be both their empty vessel and their fall guy when everything goes south. This is not the sign of a healthy “democracy.”