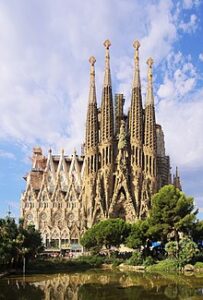 Many years ago, when we visited Barcelona, Spain, we were awestruck by the Basilica and Temple of the Sagrada Familia. We had never seen anything remotely like it, and it dominated the city’s skyline. Here is a brief description:

Often mistaken for Barcelona’s cathedral, the breathtaking Basilica and Expiatory Temple of the Holy Family, paid for entirely by private donations and sales of tickets to the 2.5 million people who visit it each year, is unlikely to be finished before 2026. Given that construction began in 1882, this is clearly the work not just of a singular and devoutly religious architect, but of several determined generations of dedicated professionals and enthusiasts.

Looking for all the world like a cluster of gigantic stone termites’ nest, a colossal vegetable patch, a gingerbread house baked by the wickedest witch of all or perhaps a petrified forest, this hugely ambitious church has confounded architects, critics and historians ever since its unprecedented shape became apparent soon after World War I.

The basilica was consecrated by Pope Benedict XVI in 2010, causing controversy to erupt once more. The inside is ornately decorated, and the outside challenges the imagination of the viewer. As you can tell from the quotation above, it was both revered and ridiculed. Gaudi began construction in 1882, knowing that it would need to be constructed over several generations.

In spite of the controversy about its construction, however, architects have been humbled by the brilliant mathematics that Gaudi was able to work out for such complex three-dimensional mathematical models in his mind’s-eye, using intuition alone.

People worldwide are deeply devoted to Gaudi and the basilica; there is an Association for the Beatification of Antoni Gaudi campaigning for him to become a saint.

To view the photo gallery of the basilica, go here.