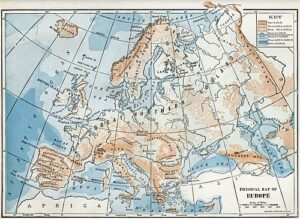 Let’s cut through the diplo-speak: If Mr. Biden and the Europeans don’t get Ukraine right, Europe’s future is finished.

Putin is Hitler. He is attempting the extermination of a people and the obliteration of their cities. World War II wasn’t fought in Europe to prevent a future nuclear exchange between Russia and the U.S. It was fought because Europe was experiencing the indiscriminate murder of civilians under Nazi military doctrine, now revived by Mr. Putin and the Russian general staff.— Daniel Henninger

In an ambitious flurry of activity, Europe is speaking out and taking action against Vladimir Putin, canceling some of their commitments to him and stepping in to help Ukraine. Most of the Ukrainian refugees are landing in Poland, Hungary, and Slovakia. The EU has established an emergency protection system, offering jobs, shelter, and medical treatment. They have also worked at streamlining their entry procedures. The invasion of Putin has been criticized harshly, and Europe has stepped up.

But how long will they enthusiastically deal with this new reality?

And will the U.S. make a sincere and reasonable effort to supply arms and compassionate support, and for how long?

Does Europe really have a choice? Over time will they try to ignore the threats that Putin poses to the European continent?

Will they realize that helping Ukraine and Ukrainians and standing up to Putin could determine the very future of Europe?