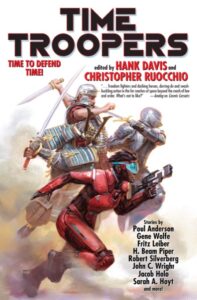 Time travel stories are almost as old as science fiction. One of H. G. Wells’s earliest involved time travel. So is combat SF.

The stories within it are gems. It opens with Heinlein’s classic “All You Zombies” and closes with Piper’s outstanding “Time Crime.” The stories between these are equally excellent, covering virtually every aspect of the time travel genre. In some, time travel is a combat weapon. In others, protagonists attempt to change history, restore history, observe history without changing it (only sometimes successfully) and travel sideways in time to alternate realities. A few combine tropes. Fehrenbach’s fascinating “Remember the Alamo” takes readers to that battle in a world where it is remembered for entirely different reasons than in this one.

The collection covers the spectrum of time in two ways.  The stories are set throughout time, from Paleothilic Earth to the unimaginably far future.  It also spans nearly a century of science fiction history. One of the stories was written in the 1930s, others in the 2020s, and the rest spread in a spectrum between those years.

This creates a different type of time travel. The stories are products of the time period in which they were written. Hamilton’s “Comrades of Time” captures the spirit of the 1930s. Van Vogt’s “Recruiting Station” reflects the war years of the 1940s.  The characters of “Time Crime” are at home in the 1950s, just as those in “Long Remembered Thunder” (Laumer, 1960s) , “Against the Lafayette Escadrille” (Gene Wolf, 1970s), “House of Bones” (Silverberg, 1980s), and “Delanda Est” (Anderson, 1990s) reflect the decades in which those tales were written.

“Time Troopers” offers readers a first-rate collection of science fiction tales centered on time travel. It reacquaints them with classic authors, and may introduce them to new authors who may become new favorites.