The Epoch Times summarizes the Dossier: “The dossier was rife with salacious, unsubstantiated claims, many of which have since been debunked by federal officials, including Department of Justice Inspector General Michael Horowitz.”

The Clinton campaign and DNC tried to hide the contributions by failing to disclose their “purpose properly.” That’s against FEC regulations.

It’s worth noting that two of the attorneys then servicing the Clinton campaign and the DNC in this matter were Mark Sussman, who has been indicted for lying to the FBI by Durham, and Democratic superlawyer Marc Elias. Elias is credited for being the mastermind behind Democratic redistricting lawsuits and loosening voter integrity requirements in states like Georgia during the 2020 election. Sussman failed to disclose that he was representing the Clinton campaign when he peddled the Steele Dossier in hopes of triggering an investigation, which he got.

Separate charges against Elias and another DNC official were dismissed, mostly over the accusation that Christopher Steele’s dossier (Steele is a British subject) was a foreign contribution prohibited by law.

The original complaint was filed by the non-profit Coolidge-Reagan Foundation almost four years ago, in 2018. It finally resulted in a “conciliation agreement” signed with the perpetrators in February, in which they admitted misreporting the expenditures in question.

The FEC’s modest fines – $8,000 to the Clinton campaign and $105,000 to the Democratic National Committee – are more evidence that the real “Russian collusion” leading up to the 2016 election wasn’t by Donald Trump. The Clinton campaign and Obama Administration conspired to politicize federal intelligence and law enforcement agencies to swing an election and undermine the Trump transition and administration, using phony Russian intel. FBI and Central Intelligence Agency officials may quibble with that, but we’ll patiently wait for Durham’s investigation to complete (if he isn’t fired in the meantime) for the final word.

The FEC’s actions seem rather mild compared to the punishment of conservative author and film producer Dinesh D’Souza for violating federal campaign finance laws. “D’Souza pleaded guilty in 2014 for donating $20,000 to New York politician (defeated 2012 US Senate candidate) Wendy Long. He was sentenced to five years probation, eight months in a halfway house, and paid a $30,000 fine,” reported Fox News.

But that isn’t the only pair of boots. Fast forward to the 2020 election when a certain laptop was left at a Wilmington, Delaware repair shop in April 2019 by one Hunter Biden. That laptop found its way to the local FBI and the US Attorney. Copies of the laptop’s hard drive were shared with former New York City mayor and US Attorney Rudy Giuliani and the New York Post. Other copies made their way to the Washington Post, which along with the New York Times, recently and finally admitted that the laptop’s contents were authentic. Including, apparently, this family-friendly photo (others, not so much). 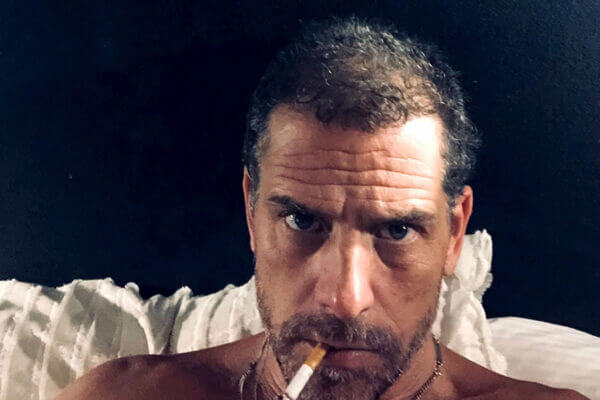 Finally, both the New York Times and Washington Post have been forced to admit that Hunter Biden’s lost laptop is real, not a “fake” or a Russian fabrication, and that it contains a trove of damning evidence (22,000 emails “authenticated”) of Biden family corruption.

The family’s dealings with the communist Chinese government and powerful officials in both Russia and Ukraine are so numerous and so byzantine it’s not possible to describe them all in this limited space.

And they’re not new. Credible reports of corruption have circulated for years in American digital samizdat circles and on alternative media and conservative web sites.

Neither Twitter nor Facebook has apologized for their error (and, frankly, a generous in-kind contribution to the Biden for President campaign).

Of course, no reporting of the Biden laptop scandal is complete without crediting investigative journalist Peter Schweizer for his groundbreaking work on the Biden family’s dubious financial ties to China, Ukraine, and elsewhere. Or, for that matter, the full story of the “Laptop from Hell,” the title of a book authored by Miranda Devine, the New York Post reporter and columnist who broke the original story. And whatever happened to Tony Bobulinski? This week, senior US Senators Chuck Grassley (R-IA) and Ron Johnson (R-WI) released bank records itemizing payments from Chinese Communist Party-linked entities.

But there’s one more set of boots: the 2020 election itself. Evidence mounts that there may have been enough shenanigans to influence the outcome. The latest comes from economist John Lott Jr., best known for his gun-related research at the Crime Prevention Research Center. The Daily Signal:

At least 255,000 excess votes were cast in the 2020 presidential election across six battleground states, according to a new study that examined individual voting precincts.

Economist John Lott, president of the Crime Research Prevention Center, is the author of the peer-reviewed study, which looked at precincts in Arizona, Georgia, Michigan, Nevada, Pennsylvania, and Wisconsin.

The study, set to be published in the academic journal Public Choice, compares precincts where there were allegations of voter fraud to similar precincts in neighboring counties that had no fraud allegations. In each comparison, the two precincts examined fall on opposite sides of a county line—in some cases across the street.

“Precincts are generally small, homogeneous areas, and when two areas are adjacent and similar to each other, why would one precinct have far many more votes?” Lott asked The Daily Signal in an interview. “If you have a get-out-the-vote campaign, you care about winning the state, [and are] not focused on the precinct.”

Lott’s study found that at least 255,000 excess votes were cast—and possibly as many as 368,000—for Democratic nominee Joe Biden in six states: Arizona, Georgia, Michigan, Nevada, Pennsylvania, and Wisconsin.

Biden beat then-President Donald Trump, the Republican nominee, by a total of 313,253 votes in the six states.

The study is just one more example of evidence of sloppiness, misfeasance, or malfeasance that resulted from the pandemic-influenced rules changes during the 2020 election. While journalists continue to ask the wrong question – do you believe the 2020 election was “stolen” – it is fair to ask if we will ever know who won.

Relitigating the 2020 election is not a winning issue, but most Americans apparently are losing confidence in our elections. That should trouble everyone. A 2021 Rasmussen Reports survey found “that 55 percent of Likely U.S. Voters support forensic audits of election results to ensure there was no vote fraud.” A subsequent survey found that 74 percent favor voter ID. Meanwhile, Democrats voted in lockstep for legislation (HR 1) last year, passing the House, prohibiting states from requiring voter ID, and worse.

Twenty-four states in 2021, most famously Georgia and, this week, Arizona, have enacted laws to strengthen voting requirements. Seventeen states thus far have banned outside groups from privately funding official elections, with Democratic governors vetoing bills in six others (one was overridden in Kansas). Pennsylvania’s legislature passed a bill allowing private funding but requiring that it be evenly distributed via the Secretary of State’s office. Democratic Gov. Tom Wolf vetoed even that bill.

The Public Interest Legal Foundation (PILF) disclosed that nearly 25,000 registrants in North Carolina are either dead, have moved, or are registered to vote twice. Some registrants have been dead for more than 20 years.

Dirty voter rolls aren’t limited to North Carolina. Through her podcast, “Who’s Counting,” GOP election attorney Cleta Mitchell has invested several hours interviewing election workers, experts, and officials in several states, including Pennsylvania and Arizona, detailing problems and concerns with election integrity. I did not know, for example, that you do not need a fixed address to register to vote in Virginia.

Speaking of Pennsylvania, a whistleblower complaint, complete with video, is pending in state court over alleged illegal activity by Delaware County, where I lived, voted, and was a poll watcher in 2020. It’s worth watching.

And yes, dead people sometimes vote. It reminds me of the quip famously uttered by the late former Gov. Brendan Byrne (D-NJ). When he died, he said, “I want to be buried in Hudson County so that I can remain active in politics.”

And that’s not all. About those “mostly peaceful” protests resulting from the tragic death of George Floyd in 2020 – one protestor in Oregon was just sentenced to 10 years in jail for attempted murder and other charges, along with $200,000 in restitution.

The legendary itinerant preacher, Charles Spurgeon, said in 1855 that “A lie will go round the world while truth is pulling its boots on.” We’re discovering, again, the veracity and wisdom of that adage.

Meanwhile, the credibility of certain media, former intelligence officials, and election administrators is slowly being destroyed before our eyes. Truth has put on its boots and is catching up to so many falsehoods. Truth, like facts, is a stubborn thing. And sadly, it moves much slower than lies.

Red-Handed: How American Elites Get Rich by Helping China Win, by Peter Schweizer

Laptop from Hell: Hunter Biden, Big Tech, and the Big Secrets the President Tried to Hide, by Miranda Devine

Rigged: How the Media, Big Tech, and the Democrats Seized Our Elections, by Mollie Hemingway.