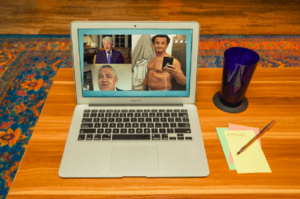 A highly-touted online panel purportedly addressing criminal justice featuring Bill Clinton, Jeffrey Toobin, and Anthony Weiner went about as well as could be expected on Thursday as all three men ended up in varying degrees of undress.

Approximately twenty minutes into the conference, Mr. Weiner seemed to lose interest when Mr. Clinton was discussing the merits of a carbon tax. Shortly thereafter the former representative for New York’s 9th district proceeded to remove his shirt in order to send a selfie to an individual he addressed as “AngelsSlut22@Yahoo.”

A short time later Mr. Clinton was asked about green energy subsidies. The former president responded by sipping from a rail drink, loosening his tie, and calling upon Mr. Weiner to “Send me her pic” – an apparent reference to Ms. AngelSlut. Mr. Weiner ignored the request, however, stating that he is to be addressed as “Carlos Danger.”

During the question-and-answer portion of the panel, a viewer submitted a question to Mr. Toobin regarding the legal complexities of cap-and-trade. Mr. Toobin, apparently unaware that his camera was on, was taking the opportunity to engage in an act so disgusting that even The New Yorker felt compelled to fire him.

Many of the more than 5,000 individuals who paid $100 to participate in the online conference later complained about the poor sound quality of Mr. Toobin’s microphone. In response, the former CNN contributor promised that moving forward he would log in from an indoor location.