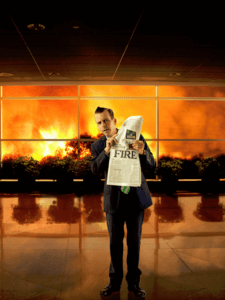 Before the pandemic, I’d perform on cruise ships every few weeks. It’s a great gig: well-paying, responsive audiences and an opportunity to visit places as diverse as Ushuaia and Singapore. While I’m certain that restrictions such as lockdowns impacted others more than me, they certainly changed my life significantly. Much of it was for the good: I began spending more time with my wife and children than ever. I learned to cook – and to love it. I spent months intensely rehabilitating an injury to my foot and then seamlessly transitioning to another rehab after surgery on my knee, culminating in the completion of my second marathon. (Pro-tip: getting physically stronger is the closest thing to a cure-all for aches and pains.) I’m now again fully fit and looking forward to our family’s skiing trip.

All the while, though, I was writing, writing, writing. It’s kind of strange to write jokes with no imminent opportunity to perform them, even if it’s so much as an open mic. I did perform several so-called “Zoom shows” during the pandemic but it’s just not the same. There was something depressing about looking out at the audience while I’m performing and everyone is starring at their devices.

No charge for that joke.

I began following trends in the cruise industry (to the extent that it existed.) Some form of cruising resumed about a year ago but it didn’t seem to resemble the status quo ante so much as an at-sea experiment in Covid maximalism: audiences greatly restricted in size, spread out and far from the stage; masks to be worn whenever leaving your stateroom; and everywhere – everywhere – Covid theater featuring the 24/7 sanitization of surfaces. (One can only imagine what such a germ-free environment does to your immune system.)

As I followed these developments I developed the feeling that I wasn’t missing much. Then my agent sent me an email with an offer: a week aboard the Regal Princess sailing between Funchal, Portugal, and Barcelona, Spain. Better yet, shortly before I was to fly out many cruise lines began greatly relaxing their restrictions. Once onboard, I was delighted to see that far from passengers sitting poolside wearing hazmat suits, the environment was refreshingly open – even to an aggressive non-masker like me.

Perhaps best of all, the cruise afforded me the opportunity to bring to the stage all-new material that has been rattling around my head for the last two years. When my shows were over I realized that in a sense I had been working harder over the last two years than I had before the pandemic. And while it took a while to enjoy the fruits of my labor, it was well worth it.