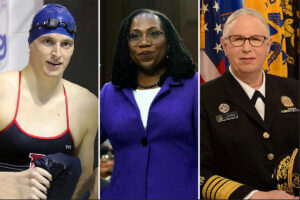 Jackson appeared befuddled. “I can’t,” she said, “I’m not a biologist.”

Any elementary schooler could answer this easily: “a woman is an adult female person.” But a graduate of Harvard Law and a Circuit Judge for the D.C. Court of Appeals had to feign ignorance.

If appointed to the high court, which seems all but assured, Jackson will rule on laws such as the Violence Against Women Act, Title IX, and the Equal Pay Act, which requires men and women to be paid the same.

If you don’t even know what “men” and “women” are, good luck with the finer points of the legislation.

Judge Jackson obviously knows what a woman is, as do the court-watchers outraged by Sen. Blackburn’s simple question. But admitting such a basic fact would upset a minuscule activist class that changes definitions faster than the Ministry of Truth in Nineteen Eighty-Four.

We must pretend to believe what everyone knows is untrue.

Another strange Women’s History Month moment was swimmer Lia Thomas’s victory at the NCAA championships. She won the Division I women’s championship despite beginning her collegiate career on the men’s team.

Thomas’s physical advantages were obvious on the podium, her frame dominating the much smaller silver and bronze medalists. But even to notice obvious facts is considered hateful. Lia was compared to Jackie Robinson while ESPN feted her with glowing coverage.

None of this is hateful to Lia Thomas but is simply an effort to preserve women’s sports. There are thousands of young women attending university on athletic scholarships, a chance they could be denied based on the whims of the NCAA’s equity and inclusion policy.

It’s awful for a talented athlete to know that the best she can get is second place. It’s a nightmare for more marginal female swimmers who might be prevented from attending college at all.

But what is a woman anyway? It’s a mystery for the ages.

USA Today celebrated Women’s History Month by choosing Adm. Rachel Levine as one of their Women of the Year. The Assistant Secretary of Health and Human Services was feted as “the nation’s highest-ranking openly transgender official.” Levine was given the appointment following a disastrous Covid response as Pennsylvania’s health secretary and has done little in her current role. Maybe next year, USA Today can find a woman who has achieved … something.

In a book about life in the Soviet Union, Elena Gorokhova (a woman, by the way) explained the great fictions their society was built upon.

As we honor Women’s History Month, a similar zeitgeist reigns in the United States.

The vast majority knows all of this is nonsense, but we’re terrified to say so publicly.

Instead, we pretend not to know what a woman is, while celebrating women’s rights. We condemn “mansplaining” as men lecture female athletes that it’s good Emma Weyant missed out on the gold. We celebrate Biden’s promise to nominate a Black woman to the Supreme Court even though she can’t admit she’s a woman.

Let’s hope Women’s History Month 2023 can go back to celebrating great women. If we don’t, women themselves could be history.