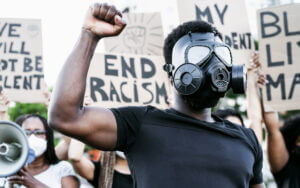 I don’t know about you, but the first time I heard the slogan “Black Lives Matter” I thought it was, well … curious. Whoever said otherwise these days? Wasn’t that obvious?

I soon discovered the depths of my naïveté. The tip-off was realizing that “All Lives Matter” was not a more inclusive iteration of the same concept, but its opposite – racist fighting words. People were vilified and fired for saying them.

It turned out that BLM was a “social justice” organization focused primarily on “intervening in violence inflicted on black communities by the state and vigilantes,” i.e., police.

But this wasn’t your typical well-intentioned social advocacy group. Its founders were Marxist activists. BLM’s goals included not only stirring racial violence, but destruction of the nuclear family and eliminating capitalism.

BLM started as a loose confederation of underfunded organizers. But their fortunes changed after George Floyd’s death in 2020. Suddenly, radical racism became a lucrative business. Over $90 million came pouring in, even though BLM did no solicitation and was not even IRS-qualified to receive it.

BLM initially parked the money with sister organizations that had IRS certification. After BLM’s nonprofit status was established, $66.5 million was immediately transferred into its account.

Here’s where the story gets murky. BLM co-founder Patrisse Cullors issued an “impact report” in February 2021, claiming operating expenses of $8.4 million and $21.7 million in grants to local affiliates, but no further detail was provided. The rest of the funding was unaccounted for. Moreover, BLM has yet to file their IRS annual report required last November.

Meanwhile, Cullors resigned last May amid reports that, absent any other known sources of income, she had purchased millions of dollars worth of prime real estate. The two activists she appointed to assume the helm of BLM declined the offer.

The worm had turned. Charity Watch described BLM as a “ghost ship full of treasure with no captain, no crew, and no clear direction.” Other philanthropy watchdogs also withdrew their endorsements.

The BLM scam, wasting the funds, was actually a good thing. According to the website Candid, non-profits devoted to “racial equity” raised $25 billion total post-George Floyd. Yet the “accomplishments” of these groups have been demonstrably harmful to blacks.

Their main policy goal was to “defund the police,” the prime cause of the everyday genocide purportedly inflicted on young black men. That didn’t turn out well.

In 2019, 7,777 Blacks were murdered, 53% of all homicide victims. After the “defund the police” movement succeeded in jurisdictions across the country, 9,941 Blacks were murdered the next year, indicating 2,000 lives were lost due to a failed ideology.

Blacks are repeatedly informed that thousands of unarmed black victims are killed by police each year, but the numbers tell a different story. As Heather Mac Donald points out, in 2019, the year 7,777 blacks were killed, police accidentally shot a total of nine unarmed blacks, one for each 800 murder victims. Decimating and denigrating the thin blue line was a tragic mistake, especially for Blacks themselves.

BLM can’t be reformed because it is based on the concept that there is social good in driving the races apart, since one is inherently predisposed to oppressing the other. Media and academic elites, playing upon the historical realities of black victimhood and white guilt, insist racism is deeply ingrained in American culture, the core influence in our history.

Americans must decide. Do we concede the future of permanent tribalism advanced by BLM, the 1619 Project, and Critical Race Theory?

Or do we still believe in the vision of Frederick Douglass, Abraham Lincoln, and MLK that Americans can achieve another historic first. We can establish a multi-racial society where race really doesn’t matter and we all share the Dream of living united as Americans.