It’s been a while since I’ve written a post in this style because “leftists at craft breweries” is not exactly a shocking new development, and I’m generally able to shrug these things off. When it’s all you see, you sort of get used to it.

That said, @dnewlander brought this one to my attention a couple of days ago, and this one did hit me hard. If I had to guess why, it’s because I actually know this place and therefore it hits closer to home for me. And so like a song that won’t get out of your head, I’m writing a post. If it doesn’t get it out of my head I can at least share the misery.

Take a look at this masterpiece of jackassery: 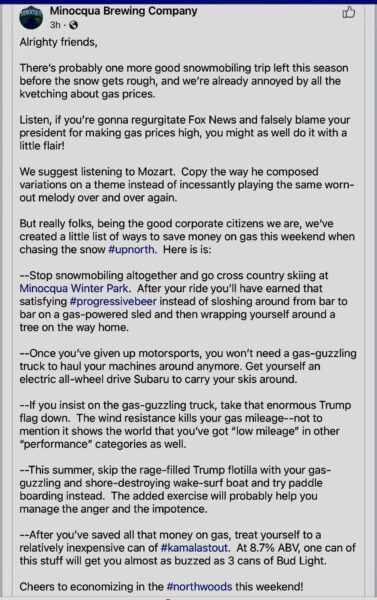 Before I start, for those of you who aren’t familiar which I expect is most of you, Minocqua is a tourist haven/summer house destination for FIBs* in northern Wisconsin.

Yes, because they were the only ones, it was just all the Democrats doing it were doing things you liked, so it wasn’t “politics”.

All right, let’s break it down.

“We’re already annoyed by all the kvetching about gas prices.”

I don’t know how long they’ve been in operation, but I lived in the area for more than half my life and it’s been a pretty constant theme the whole time. Not only that, it’s a big empty area on the map. You’re gonna have to worry about it if you want to get anywhere.

“If you’re gonna regurgitate Fox News and blame your president for making gas prices high, do it with a little flair!”

I’ve watched about half an hour of Fox News over the past couple of years. I don’t need them to tell me that gas prices have gone crazy. I can see it.

“We suggest listening to Mozart. Copy the way he composed variations on a theme instead of playing the same worn-out melody over and over.”

You lead with a Fox News hit and you’re complaining about worn-out themes? Mr. Pot, have you met Mr. Kettle?

Well, the good news is if I’m going to do that I’ve got a lot more options available to me. I might not even have to go to Minocqua.

“Once you’ve given up motorsports, you won’t need a gas-guzzling truck to haul your machines around anymore.

I think this is what really got me. You’re in a place where people drive trucks for actual use and yet you still mock them.

“Get an electric Subaru to carry your skis.”

Not content with being smug jerks, you have to be stereotypical too? Maybe when I have confidence that the battery won’t die in -30 degree weather, then I’ll think about it. Or when there are actually enough people to support a charging station. Or when I’m not worried about the vehicle range allowing me to actually get anywhere.

“If you insist on the truck, take the Trump flag down…it shows the world you’ve got “low mileage” in other “performance” categories as well.j

What was that about “variations on a theme” again?

“After you’ve saved all that money on gas, treat yourself to a relatively inexpensive can of Kamala stout. It’ll get you almost as buzzed as three cans of Bud Light.”

Point 1: If you had been bold enough to tell me that it’s what she has before she has any speaking to do, I’d be convinced of its effectiveness.

Cheers to economizing in the Northwoods this weekend!

Well, you convinced me. I guess I’ll stay home and have a Bud Light or three.