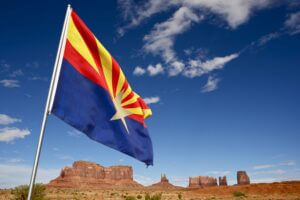 While the presidential election got the most press, Arizona’s 2020 ballot had a proposition that made tax-cutters and fans of limited government very concerned. The electorate trended left that day, sending gun-grabber Mark Kelly to the Senate, giving five of nine congressional seats to the Dems, and approving Proposition 208, a tax-the-rich scheme pushed by ever-greedy teachers’ unions. Less than one percent of the campaign’s funding came from in-state sources.

The law imposed a 3.5% tax surcharge on taxable annual income over $250,000 for single persons or married persons filing separately, or $500,000 for married persons filing jointly or heads of households, to increase funding for public education. This nearly doubled the state’s highest tax rate. At the same time, it turned Arizona from one of the lowest-taxed states in the country to one of the highest.

As Californians fled to the east, they noticed Prop 208 and drove right through Arizona. Why settle a business in the Grand Canyon State if they’ll just have to move again in a few years?

There was, however, another problem with the proposition: it was unconstitutional.

Today, justice was served. State-based stalwarts at the Goldwater Institute took Prop 208 to court. The bench agreed the initiative violated the state Constitution’s restrictions on spending and taxation and barred enforcement of the law.

“Today’s decision puts a nail in the coffin of the unconstitutional, job-killing Proposition 208, and it cements Arizona’s position as the national leader in lower taxes and building a stronger economy,” said Victor Riches, President and CEO of the Goldwater Institute.

Last year, Gov. Doug Ducey signed a massive income tax reduction and simplified the tax code. With that 2021 victory and today’s win, Arizona is again one of the lowest-taxed states in the nation.