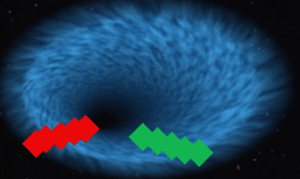 Iran is not the problem, nor is Russia, per se, rather, the ruling elites in each country hold aggressive, expansionist views. AND. pResident Biden and the Jew-hating left have common cause with these two petro-dollar fueled powers. That is, sadly, nothing new. What is new is the open linkage of Russian and Iranian regimes in a triangle with the secular left in the Swamp. These two malign actors are allies of convenience, forming a new and much more formidable “axis of evil” with the imperial Chinese leadership. So it is that the Russian regime uses the computer skills of Iranians to attack the West, perhaps in place of former Warsaw Pact hackers whose governments are no longer cozy with Moscow. The Swamp, including the congressional Republican’ts led by Mendacious McConnell and Misleading McCarthy, will do nothing real about this, as they need Russia to deliver a new and even more dangerous nuclear deal with Iran.

The Swamp and the New Axis of Evil

I have posted a series of articles pointing to the red-green alliance of convenience between the secular left and Islamists, each headed by this base graphic, modified with the particular focus of the article. It illustrates a political leap forward powered by the red and green forces together. I have also pointed to the collusion between McConnell, McCarthy, their congressional enablers, and the Democrats against us. We also all know that the Republican establishment sold out Americans for the benefit of economic elites through trade deals with China, deals disrupted by our champion, President Trump. If we tolerate, if we enable, Republican congressional candidates winning in 2022 primaries without pledging to actually deliver on campaign policy promises by first changing leadership personnel, we will get more planned failure and more damage to our land and our lives.

Putin and the Theocracy Hacking the West

A week after the Biden inauguration,  Moscow and Tehran publicly signed an agreement on “cyber security cooperation,” meaning the two regimes publicly acknowledged the long-standing cooperation between the two governments on defensive and offensive actions. A former Republican member of Congress warned of Russia and Iran partnering to launch network attacks back in 2014, during the Obama administration.

“Iran and Russia will develop a much closer relationship,” said Hoekstra, who was on the House’s intelligence committee from 2001 to 2011. “Russia and Iran have so much to gain from more significant cooperation [and] the immediate impacts will be profound.”

As Russia continues to take an aggressive stance towards the United States, its “assistance to Iran’s cyber program” will grow exponentially “as Iran continues to develop offensive and defensive capabilities,” Hoekstra said, noting that this “foreshadows an even darker future.”

As Putin invaded Ukraine, the U.S. government published a dry announcement that the Iranian government sponsors a hacker group.

MuddyWater is a subordinate element within the Iranian Ministry of Intelligence and Security (MOIS). This [advanced persistent threat] APT group has conducted broad cyber campaigns in support of MOIS objectives since approximately 2018. MuddyWater actors are positioned both to provide stolen data and accesses to the Iranian government and to share these with other malicious cyber actors.

The left is so desperate to harm the United States and Israel that the Biden regime is depending on Putin to deliver a new nuclear weapons deal, freeing the theocrats to unleash global terrorism from behind a nuclear shield. They are desperately pressing forward with this agreement while Congress pretends to be powerless and clueless. Mendacious McConnell and Misleading McCarthy, with their cohorts, naturally expect to personally profit from this catastrophe, and they will unless each of us demand that every primary candidate this year denounce them and pledge to dump them or deprive McConnell and McCarthy of a governing majority, forcing incumbent representatives and senators to choose between personal power and their current leaders. The Biden regime is shameless, beyond humiliation in reviving the Iran nuclear deal.

[T]he administration is desperate to forge a new and “improved” version of Obama’s disastrous Iran nuclear deal. There is no good reason for this; it is yet another case of “because Trump reversed something that Obama did, Biden must reinstate it.” It doesn’t matter how apparent it is that Trump reversed the deal because it was both reckless and unpopular or even that the recklessness of reinstating it will make Biden more unpopular.

Tehran understands this well, and in its “Death to America” contempt for our feckless government, humiliates Biden by refusing to meet directly with his envoy, appeasement aficionado Rob Malley. The Biden administration is thus forced to grovel and plead for the intercession of Vladimir Putin’s regime, which (along with China) is Iran’s patron. This is especially delicious for the mullahs now: They know that, on the world stage, Biden is trying to play hard-ass against Putin regarding Ukraine, echoing Biden’s legend-in-his-own-mind routine on the 2020 campaign trail; yet, in reality, Biden is a five-alarm phony who, behind the scenes, is actively colluding with Moscow to get a new Iran nuke deal done.

The Russians are laughing at us.

Shocking video: This is the lead Russian negotiator for the Iran nuclear talks, Mikhail Ulyanov.

He's bragging about how Russia, Iran, and China teamed up to deliver huge wins for Iran's nuclear program in Vienna negotiations. pic.twitter.com/oiTOgfh99i