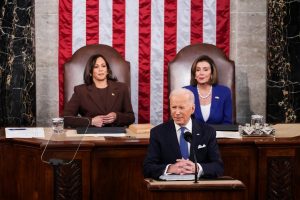 With so many issues competing for headlines, it would be easy to overlook President Joe Biden’s stumping for abortion during Tuesday night’s State of the Union address.

After all, it’s been almost 50 years after the U.S. Supreme Court handed down its disastrous Roe v. Wade ruling striking down protections for unborn children and their mothers. Presidents have come and gone while more than 60 million Americans have lost their lives to the violence of abortion.

But this is a different moment. Thanks to a case called Dobbs v. Jackson Women’s Health Organization—a direct challenge to Roe that should be decided at the High Court by this summer—abortion advocates may find themselves playing from behind on the issue for the first time since 1973, when President Biden was a freshman Senator from Delaware.

Worried that a decision in Dobbs will upend the longstanding regime of abortion, the urgency for President Biden’s party to protect this Court-invented “right” is palpable.

On Monday night, the so-called “Women’s Health Protection Act” stalled out in the Senate. Akin to New York’s extreme 2019 “Reproductive Health Act,” the bill is for a dramatic extension of Roe. Along with establishing abortion-on-demand as a fundamental right throughout all nine months of pregnancy, the Act would invalidate almost every state law regulating abortion, including the most basic and commonsense—significantly ratcheting up the physical risks abortion poses to women.

With the failure of the Act (the latest in an ongoing string of attempts to “codify” Roe) taking place just 24 hours earlier, President Biden seemingly urged Congress to give the approach another go. And in doing so, he couched his support for abortion up to and including the point of birth as part of the advancement of “liberty and justice.”

“Advancing liberty and justice also requires protecting the rights of women,” President Biden said. “The constitutional right affirmed in Roe v. Wade — standing precedent for half a century — is under attack as never before. If we want to go forward—not backward—we must protect access to health care. Preserve a woman’s right to choose. And let’s continue to advance maternal health care in America.”

Before going any further, it’s worth asking whether President Biden has a definition in mind for “woman”—which he used twice in just a few short sentences. After all, his appeal for legislation to “[p]reserve a woman’s right to choose” to abort her child came just seconds before voicing his support for the so-called “Equality Act,” which promises to fundamentally redefine in law what it means to be a woman.

But that’s not the only question President Biden’s statements raise. For instance, what are we to do with the reference to “maternal health care”? Doesn’t the tacit admission that a pregnant woman is a mother require us to also recognize who she is the mother of?

Or, what interest in “liberty and justice” is served by the slaughter of an innocent child? Is the aborted baby able to enjoy freedom? Is justice in some way served by depriving the child of life?

Or, why does the idea of forward progress mean protecting a lethal form of discrimination that not only kills a defenseless child, but disproportionately targets minority communities and the disabled?

Or, what of President Biden’s appeal to “standing precedent for half a century”? Does the passage of time determine whether a Supreme Court decision was correct? Was the Supreme Court correct in 1857 when it decided in Dred Scott that a slave was not a person? It took several years, a bloody Civil War, and two constitutional amendments to finally correct that reprehensible decision.

But perhaps more fundamentally, the question we should ask is what President Biden—or many of his fellow abortion advocates—really means by “constitutional right affirmed in Roe v. Wade.”

The U.S. Constitution is composed of 7,500 words, including its seven articles and 27 amendments. Spelling out the enumerated powers of the federal government, America’s founding document is unique among national charters—rather than telling the people what powers it has, it runs the other way, with the people telling the federal government what it may and may not do.

Of course, nowhere in the Constitution will you find even the slightest scintilla of reference to a supposed “right” for a woman to end the life of her child through abortion. Nowhere in the Constitution did our nation’s founders grant to lawmakers in the nation’s capital the right to overrule state and local laws concerning abortion and the protection of innocent life.

That’s why, when the Supreme Court did just that in its 1973 Roe decision, the Court relied not on established constitutional law, but on a so-called “penumbras formed by emanations” of actual rights it had only recently identified in its 1965 decision Griswold v. Connecticut.

Edward Lazarus, who served as a law clerk to Roe’s author, Justice Harry Blackmun, said it well: “As a matter of constitutional interpretation and judicial method, Roe borders on the indefensible.” The late Justice Ruth Bader Ginsburg was similarly critical of the decision, calling it “heavy-handed judicial intervention” that “halted a political process, … prolonged divisiveness, and deferred stable settlement of the issue.”

In Dobbs, the Court has before it an ideal opportunity to correct its past error and finally return the question of abortion to the people. Finally, the people would have their own chance to craft law and policies aimed at protecting innocent life.

That may not be good news for President Biden and his fellow abortion advocates, but it’s certainly closer to what America’s founders had in mind. And it’s the clearest path to advancing a culture of life—where every innocent life is valued, celebrated, and protected—once and for all.