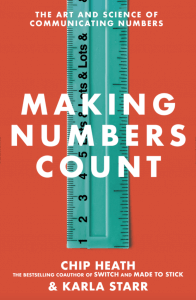 “Making Numbers Count: The Art and Science of Communicating Numbers,” by Chip Heath and Karla Starr, offers a solution to that problem. It presents tools to understand numbers and effectively communicate the meaning of numbers to others. The authors provide a step-by-step process to give readers mastery of numbers using a few simple rules.

Heath and Starr then present the rules used to develop this analogy. Translate everything into understandable concepts, focus on one thing at a time, and use user-friendly numbers. They go beyond this, explaining the strength of analogy, keeping numbers on a human scale, using techniques to convert abstract numbers into concrete concepts, and models to make things understandable. It sounds simple once they break things down.

There are times while reading “Making Numbers Count” you are reminded of Mark Twain’s adage that “there are lies, damn lies, and statistics.” Heath and Starr are open about using their techniques to sway opinion and shape your intellectual battlefield. They show how to make effective emotional appeals using numbers. They also make you aware when these techniques are used on you.

“Making Numbers Count” is written both for people that intuitively grasp numbers and those for whom numbers are an impenetrable barrier. Those comfortable with numbers will find it a tool that allows them to effectively communicate the meaning of numbers to others. Those who preface discussions by stating “I was told there would be no math” will realize “Making Numbers Count” allows them to grasp numbers with a minimum of math. Either way, this book is worth reading.