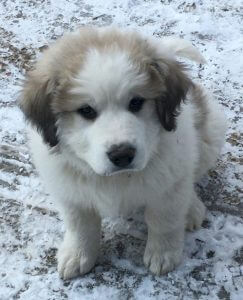 Well, OK. Einstein was wrong. (I say this because I refuse to believe, just because I indulge this particular sort of repetitive behavior–always believing that, next time, when the end comes I’m going to weather the storm without incident–that I’m insane. Obtuse, stubborn, and human, perhaps. But not insane.)

Shortly before Christmas, it fell to my lot that I had to have my wonderful Levi (The Greatest Pyrenees) put to sleep because his back legs stopped working. It was an outcome I’d feared for a couple of years, and a situation which, especially when you’re talking about a 150-plus-pound four-leggedy creature, just wasn’t sustainable.

Other than the back leg issue, even at the age of 11, he was in what the Victorians used to call “rude health.” Loved life. Loved me. Loved the farm, the sheep, the chickens, the companion of his old age–Xena–and everything else in between. Here’s the last photo I took of him, when the two of us were at the veterinarian, about ten minutes before the deed was done: 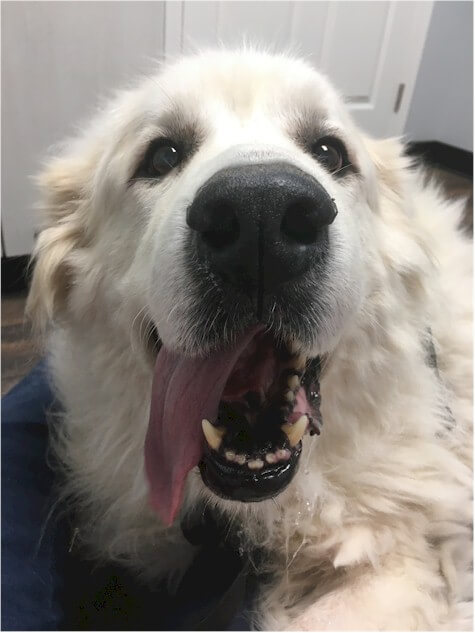 He trusted me. And I had him killed. It was the absolute best, and rightest, thing to do. But, Lord, it tore my heart.

It still hurts. And I still miss him like stink. He was, in every sense that a dog could be, a real mensch. He loved me to bits. I know (in spite of his lifelong fear of gunshots, thunder, and any unsourced and scary noise), that he’d have defended me to the death. He was a pillow to lie on when I needed one, and a shoulder to cry on when I needed one. I loved him to bits, too. Still do.

And yet. I’m not one to think — once an earthly relationship has ended for one reason or another — that there’s something terribly sinful in wanting to move on, to love, to live, and to continue to find pleasure in my life, and to do what I can to share my own joy with another. So a couple of weeks after Levi died, I asked my veterinarian friend if she knew anyone who bred Great Pyrenees, who might have a litter and puppies available.** She suggested someone. And my journey to find a new companion for Xena, who has appeared rather lost since her special guy moved on, began.

It ended on Saturday, February 12, when I picked up “Odo” from a farm in southeastern Ohio. (TBPC, he’s named after the 12th-century Pyrenean saint, not the Star Trek shape-shifter.)

Crimenutely. What a lovebug. He’s nine weeks old and huge already. This morning, I took him to meet the local veterinarian. He’s nine weeks old, and weighs almost 25 lbs. His ‘mom’ in Ohio just kept repeating, “he’s going to be really big,” as if that were some sort of charm to ward off evil spirits. But, hey. This is me. I do “big.” Especially when “big” picks me, as Levi did so many years ago, and as Odo did when I walked into the paddock with his mother, his brothers and sisters, and the goats. He’s the one who came over for a hug. And, as is usually the case in such instances, that was that. So I took him home.

He’s not a show dog. He was raised on a farm to be a guard dog. I like that, not least because he already understands things like ‘fence,’ ‘stall,’ and ‘paddock.’ He’s met my sheep — one of whom sent him flying through the air — and the chickens (who have already initiated their own sort of affectionate chickenly relationship with a creature they obviously see as their ultimate protector). He’s dancing gingerly around the cats. Psymon bloodied his nose. and Odo steered clear for a day. He seems to have regrouped, and I think his attitude now is something like, “Well, OK then. You’re never going to get any bigger, but in about six months I’ll be 100 lbs. or so, and then we’ll re-negotiate the hierarchy.”

And he’s met his Auntie Xena.

She hates him. Still, we’ve moved on from circumstances in the first 36 hours when she wanted nothing more than to close her eyes, open them again, and find that he’d disappeared in a cloud of smoke forever, to a point where she at least acknowledges his existence and has decided to do what she can to forestall his stumbling attempts at subservient, slobbering, puppy-dog tail-wagging, friendship. Witness this photo indicating her determination to 1) contain him, 2) stop him from bothering her, and 3) secure the food supply from his depredations: 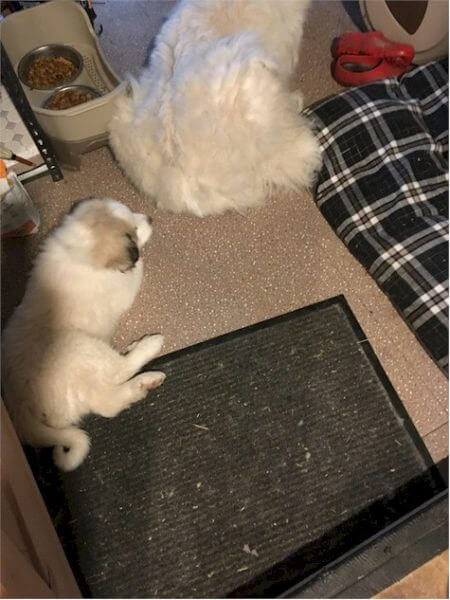 Little by little, we’ll get past this, and peace will prevail. Here’s where things stand today: 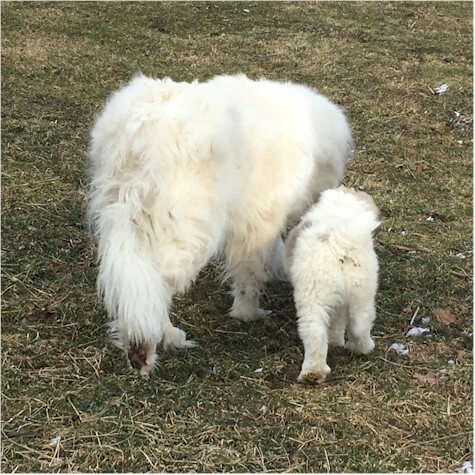 We’ve reached a point where, if we can get the pecking order of the food sorted, and if I can get Xena past her attitude of “all the dog food am belong to me,” we’ll be fine.

Odo is proving extraordinarily mellow, for such a young guy. Well-behaved, and very chill. (Although he really dislikes rides in the car.) Part of that is the breed standard–GPs are not typically nervous or super high-energy dogs. As with most loving relationships, much of the foreplay has to do with discovering each others’ boundaries. They like to know what’s expected of them, who they’re responsible for guarding, which creatures are permitted within the perimeter and into the house, and once they’ve figured all that out, they simply get on with it, usually pretty genially and sweetly. Except when the predators show up. And then they are fierce.

I’ve spent much of the last couple of days walking the farm boundary with both dogs. It’s something I learned I needed to do with Xena, who grew up in a small Philadelphia apartment, and really didn’t have a clue how to behave when set free within a fenced area, even one comprising a couple dozen acres. And so she reverted to the “chase” behavior encouraged by her previous owners when they took her for a weekend walk in the park.

You really can’t have “chasers” on a farm. It took me almost six months to break her of that habit and to discover, when I had, what a really instinctual guard dog she is.

It’s taken Odo about three days to get the hang of things outside the house. Inside the house, he’s a work in progress, and I expect that to be the case for a while. (I’m not looking for full-time working guard dogs, ones that live in the barn with the livestock all the time. I expect my creatures to strike a balance, and to know how to behave in both worlds, inside and out.)

Here he is, in the snow. I defy you–if you’re human–to tell me that this brings you anything but joy:

I see that the recent movie, “The Power of the Dog,” has been nominated for a dozen or so Academy Awards. The title is taken from Psalm 22:20:

Deliver my soul from the sword; my darling from the power of the dog.

As interpreted in the film, “the power of the dog” is a tale “about toxic masculinity, sexuality [and] about how they can lead to a person’s destruction.”

Of course, it is!

Apparently, there are overtones of latent homosexuality as well.

Of course, there are!

The film’s director, Jane Campion, ties those themes, described as related to the male ego, to Donald Trump.

Of course, she does!

“Like, when things didn’t go well for him [Trump], he melted,” Campion said to Indiewire. “He couldn’t ever even say the words ‘I lost.’ He created this massive fiction. Even to say the word ‘failure’ is just not an option for someone like him, for these kind of men.”

“Failure is not an option.” A concept, and now bywords, not for overcoming insuperable obstacles and finding success, but for toxic masculinity.

I’m not about to deconstruct Psalm 22 and tell you exactly what it means for me. There are others far better suited to the task, and I’d love to hear from them.

I am going to refer to a favorite poem, also called “The Power of the Dog,” by one Rudyard Kipling (emphasis mine):

When the body that lived at your single will,
With its whimper of welcome, is stilled (how still!).
When the spirit that answered your every mood
Is gone—wherever it goes—for good,
You will discover how much you care,
And will give your heart to a dog to tear.

We’ve sorrow enough in the natural way,
When it comes to burying Christian clay.
Our loves are not given, but only lent,
At compound interest of cent per cent.
Though it is not always the case, I believe,
That the longer we’ve kept ’em, the more do we grieve:
For, when debts are payable, right or wrong,
A short-time loan is as bad as a long—
So why in—Heaven (before we are there)
Should we give our hearts to a dog to tear?

“There is no safe investment. To love at all is to be vulnerable. Love anything, and your heart will certainly be wrung and possibly broken. If you want to make sure of keeping it intact, you must give your heart to no one, not even to an animal. Wrap it carefully round with hobbies and little luxuries; avoid all entanglements; lock it up safe in the casket or coffin of your selfishness. But in that casket—safe, dark, motionless, airless—it will change. It will not be broken; it will become unbreakable, impenetrable, irredeemable.” – C.S. Lewis, The Four Loves

Someone in my family who was going through a very difficult time once said to me something like:

Why does it hurt so much? Why do I keep on doing this?”

And then she answered her own question:

It’s because I’m human, and because I have a heart. And because the fact that my heart keeps hurting so much means that it is working properly.

Our hearts hurt because we’re human. And because we keep on making ourselves vulnerable, “even to an animal.” Because humans don’t thrive when they have “unbreakable, impenetrable, irredeemable” hearts.

Loving, and being vulnerable, is the best–and the worst–part of being human; we should embrace it, and we shouldn’t ever stop. No matter what.

Happy belated Valentine’s Day to you all and to all those you love!

**I had my last puppy, Wulfie–an Old English Sheepdog–in 1986, the year Mr. She and I moved into a field and started to build our house. (TBPC, he was named after the 11th-century St. Wulfstan, Bishop of Worcester, and not after the young Mozart.) He grew up with, and on, the farm. I’ve had dozens of dogs in the intervening thirty-six years; they’ve all been adult runaways, strays, victims of abuse, or retrieved from people who no longer wanted them. Lord, I’d forgotten how much fun, and what a challenge, a puppy can be. Were Odo a character in Greek or Roman mythology, or a hero of one of the Norse sagas, he’d be known as “Odo, Thiever of Shoes.” Sometimes he undoes the strap with his teeth and takes them right off my feet before he starts to chew on them. Sometimes, he doesn’t even bother to remove them first.