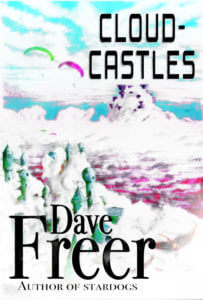 Augustus StJohn Thislewood III is the scion of an industrial barony in the planet Azure (a barony in terms of influence rather than actual nobility). Briz is an orphan, a young petty criminal who lives by her wits.

“Cloud-Castles,” a new science fiction novel by David Freer, opens with Augustus and Briz meeting. He has gone to Sybill III to uplift the natives. She is one of the natives. She starts their acquaintanceship by robbing him.

Sybil III is a gas dwarf with a habitable zone in its atmosphere. Two space-faring races, the mutually-hostile Thrymi and Zell used it as a neutral meeting place. Anti-gravity technology floated a trading plate used for exchanges and floating mansions for the Thrymi and Zell on) Sybil III. They created bioengineered floating plants for subsistence. Before humans began star-travel, the Thrymi –Zell War knocked both back to barbarism, from which they never emerged.

Criminals occupy the trading plate. Their prison ship, Botany Bay (sent from an Australian-colonized planet) crashed on the trading plate. They call it the Big Syd. Life there makes Charles Dickens’s worst nightmares of London look tame. Those coming voluntarily are remittance men fleeing disgrace, various diplomatic staff or a few off-world businesses catering to the visiting tourist (who generally leave after getting robbed blind).

Augustus, an anthropology graduate is there through misplaced idealism. He is going to take his college learning and make life better for the savages. He is so naive he thinks Briz is honest and a young boy. Briz, hires on as his guide to steal his luggage. She returns it to him when she realizes she can fleece more money from him by serving him as his guide.

The two forge an unlikely partnership. Augustus is not stupid. He is an unworldly version of Willard Phule, the armament heir in Robert Asprin’s SF series. (Briz is like Meb in Freer’s Dragon series.) Thistlewood’s combination of naivety, incorruptibility, and family background soon lead to his cleaning up Big Syd – all accidentally and hilariously. Briz appoints herself his keeper. He needs someone to help him stay alive, especially once the crime bosses decide Augustus needs to go.

Dave Freer always writes a worthwhile story. “Cloud-Castles” is a delightful romp,  having everything needed for an entertaining tale: space aliens, a kaleidoscope of human societies and a fascinating world, with a good dollop of humor and a happy ending mixed in.