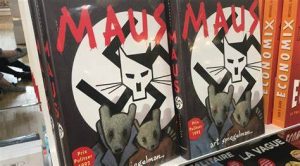 Maus is a graphic novel (fancy talk for comic book) by cartoonist Art Spiegelman. In the story, Spiegelman interviews his father about his experiences as a Holocaust survivor. It features anthropomorphized versions of the players in these events: Jews are mice, Germans are cats, Poles are pigs, Americans are dogs, and so on. As a fan of sequential art, I can attest to it being very well done. It is also the only graphic novel to win a Pulitzer Prize.

It’s also been in the news as of late. Apparently, it’s the latest victim of right-wing Holocaust denial and censorship. Take a look at some of these articles:

‘Maus’ controversy: A Tennessee school board removed the graphic novel about the Holocaust from curriculum – CNN

Conservatives mastering cancel culture. Anti-Semitic Republicans. The right does not want you to know about the Holocaust. Something doesn’t add up here…

Censorship never comes from the right, especially today. Who is censoring Joe Rogan? Who supports speech laws? Who thinks speech is violence? Who gets people fired for believing in biology? Who only wants to hear one side of the debate? And how is Holocaust denial mainstream? I’m not going to deny those people exist, but they’re somewhere down near the flat-earthers as far as influence goes. Needless to say, these headlines caught my attention and I needed to look into this further. Something doesn’t smell right…

McMinn County schools of Tennessee removed the book from their 8th-grade curriculum due to graphic content. The school board voted 10-0 to remove Maus, citing profanity, nudity, and graphic depictions of suicide, murder, and violence. Is this really censorship?

I find the accusations of right-wing censorship not only projection, but completely absurd. First off, the local school board has every right to decide what to teach. That’s federalism. And the school is not “skipping over” the Holocaust. The Holocaust is still part of their curriculum. One book was removed. One book that was determined unanimously by the community to not be age-appropriate. This is not “Holocaust denial.” How on Earth can these people say that with a straight face?

I am of the belief that even if representative of true events, there are certain things that are not appropriate for all ages. Maus is graphic. You can still teach the Holocaust without using that particular work. Do I think it’s appropriate for 8th graders (13- and 14-year-olds)? Depends on maturity levels, which can vary greatly at that age. I also don’t have children in the McMinn school district. That’s up to their parents. I can say one thing, I’m not going to watch Schindler’s List with a 10-year-old. That’s not “Holocaust denial” or any of these other ridiculous assertions. Regardless of whether something is historically accurate or not, not all historical depictions are appropriate for all ages.

And we don’t need to go here, but they threw the first punch and it’s only fair I hit back. The censorship of the millions of lives destroyed by communism is real. High school textbooks spend entire chapters on Naziism and World War II, but communism is mentioned as an afterthought. A “good idea” that was botched in execution. That’s real censorship. We don’t even have to include Stalin and the USSR. The body counts left in the wake of Mao and Pol Pot alone dwarf those of the Nazi concentration camps. By tens of millions. Does that mean I’m diminishing one evil for another? No, I think they are both horrific. I’m accusing the Marxist educators who push this Bolshevik revisionism of what they accuse McMinn County of. They can’t have it both ways.

I stand by the school district’s choice to choose their own curriculum. What do you think?