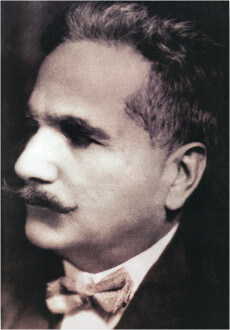 Allama Iqbal is a very interesting Islamic philosopher of the Indian Subcontinent. From the early 1900s, the national poet of Pakistan, and the only philosopher I know of who has an international airport named after him.  Esteemed by–oh, I don’t know–maybe only half a billion people.  Maybe more.  Or maybe just a quarter-billion.  I don’t know.

I can’t pretend to have the Quran-reading skills, the Rumi skills, the Urdu skills, the Persian skills, the history skills, or any of various other talents I’d need to be able to introduce Iqbal properly.  But there’s one thing I can do better than just about anyone: I can read a neat little book and explain some of what its sentences mean.

Just some.  Not all–good Heavens, no!  Do I look like I have that kind of time, or that kind of brain, or all those skills?  But then–no one does anyway.  The perfect Iqbal scholar does not exist, and an imperfect philosophy reader like me can still help with his book.

Specifically, I’m talking about The Reconstruction of Religious Thought in Islam.  Here’s the Rumble channel where I explain it (and here’s where you can subscribe to me on Rumble), and here’s the YouTube playlist.  New Iqbal videos–a series of 34 of them!–have been coming out every Thursday on Rumble since May.  YouTube is lagging behind; the new series will start there in September.

Here are a few tips on some interesting stuff in this book.

Iqbal is one of those guys (like C. S. Lewis, the Dalai Lama, William James, and others) who explains that religion is empirical–meaning that religion is about getting knowledge from experience.  A good first step in understanding his account is this definition of knowledge: experience + reflection.  Knowledge is what happens when we carefully interpret experience.

Religious belief is also empirical; it’s a reflection on experience:

There seems to be no reason, then, to accept the normal level of human experience as fact and reject its other levels as mystical and emotional. The facts of religious ex­perience are facts among other facts of human experience and, in the capacity of yielding knowledge by interpretation, one fact is as good as another.

But obviously not every interpretation of experience is equally good.  And our interpretations ought to be tested.  That’s what we do with science, and we’re supposed to do it with religion too:

Nor is there anything irreverent in critically examining this region of human experience.

But do we have tests for religious belief?  Yes, Iqbal says–two of them.  There’s the intellectual test: Does the religious picture of the world fit with everything else we know about the world? And there’s the pragmatic test: Does a religion lead to good results?  Iqbal spends a chapter of his book on each test.

And that’s still barely scratching the surface.  There are whole layers to Iqbal’s empiricism that it’s easy to miss out on. For example, we aren’t supposed to just know about reality, but also interact with it.  Here is my attempt to chart the connections between some of Iqbal’s ideas in this book.  (I hope the letters aren’t too small!) Now for two things in this book I enthusiastically agree with.

“All is holy ground,” he says. Everything created by G-d is good.  Amen!

And human beings are the image of G-d, meaning that we are the representatives of G-d on earth with the responsibility to cultivate creation in G-d’s name–to join in G-d’s creative work.  Amen!

Not that I can agree with Iqbal on everything.  I disagree on redemption. Iqbal doesn’t believe in it.  I do.

Anyway, this stuff is interesting. It’s not as important as the Bible, probably not as important as Augustine or Confucius.  But it is kind of important, maybe much more so than my philosophical homeboys John Dewey and Seneca.  And now you can even talk to your Pakistani friends about Iqbal!