I work in technology. I currently spend most of my days creating tools to make the observed performance of super computers more explainable. Explainability is a long-standing problem in complex systems of all kinds. It’s a huge problem in machine learning in addition to super computers, which are themselves often comprised of thousands of distinctly different compute engines, each performing only a fragment of the total calculation. The more complex the system, the more critical it is to begin one’s investigation with humility.  Humility is like some kind of magical elixir of extreme curiosity: if you think you already know a lot, you are unmotivated to explore. Which, I guess, is a rubber-meets-the-road existence proof of the Dunning-Kruger effect. Also probably why high self-esteem can be the enemy of achievement.  One of the very best data scientists I know, when asked what he does for a living, has been known to reply, “I’m a data scientist, but none of us really knows what we’re doing.”

Which brings me to Covid. When faced with the uncertainty caused by complexity, there is a very human eagerness to get past that pesky uncertainty and move on to a point of comfortable certitude. That way you feel when you’re trying to get past the homeless guy on your way into Starbucks.

We are living through very uncertain times, and it seems to me that much of the social upheaval between all sides of the Covid-response wars represents a kind of hysteria rooted in a maniacal need to feel as if we have sufficient answers. Many of us are eager to race past the open questions (e.g. “masks now and forevermore”) and adopt a posture of certitude. Everyone, of course, claims “science” as the mascot of their Covid response doctrine. 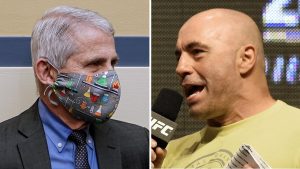 Most of us are unqualified to thoroughly evaluate the science, but who wants to be unscientific? So we’re faced with one of two choices: believe the authorities, or believe our own lyin’ eyes. Some people, let’s call them “faucists,” are actually eager to trust the authorities. They trust that bureaucrats who have grown fat at the federal trough nevertheless have the citizen’s best interests at heart. Maybe they do – “no one knows the heart of man” (St. Paul). But I am harassed by doubts. The faucists, though, banish all such doubts and would even dearly love to banish other people who have doubts, especially if those doubts are regarding the altruism of government-made gazillionaires. The faucists have found certitude, but it is certitude borrowed from the authorities. They have embraced a bureaucrat’s certitude as their own.

On the other hand, some people want to develop their own certitude about Covid, let’s call them “roganists.” Usually unwilling to consider even the possibility of confirmation bias, roganists draw their conclusions from a multitude of assembled anecdotes regarding people who have actually recovered. Anecdotes are not data, of course, but that does not impede the determination of the roganists to find certitude in anecdotal evidence.  And it is important to note, by the way, that anecdotes are evidence and don’t have to be ignored merely because they did not meet the fastidious standards of the biotech community or their bureaucratic allies in the government. Nevertheless, I suspect the certitude of the roganists suffers from the same problem as that of the faucists, which is that the trustworthiness of their source of certitude is essentially unknown.

The thorny problem we have is that, in the current complex environment, there’s no way to rush the acquisition of certainty. That means two things if we’re going to live as fully human. First, we’re going to have to find it within ourselves to recalibrate our notion of acceptable risk – a tiny notch higher. Still far below what most of our ancestors lived with – especially those before antibiotics. But it’s a teeny bit higher and we need to live fully anyway. Second, we’re going to have to be patient and allow for the passage of time to develop a more fully informed understanding.

In the meantime, we need to recognize that, however much we’d like to cling to a faux sort of certainty, we can’t yet really have actual certainty. So graciousness is called for. And liberty. And tenderness.

And by all means, we need to mock the self-serving pretense of certainty offered up by government bureaucrats. And we need to sympathize with the fears of our neighbors who have understandably lost faith in the authorities. Most of them are just trying to find their way to safety.

Even though I believe none of us has the certainty we would like to think we have, it’s still ok, if we’re so inclined, to join together in giving a hearty Bronx cheer to the multi-millionaire patron saint of the faucists.