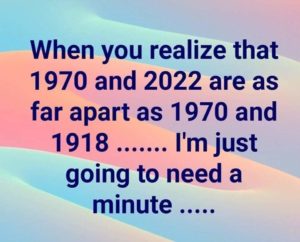 This is making the rounds on Facebook. Luckily, I don’t believe everything I see on the Internet. I mean, that’s nuts, right? I was born in 1968. Which was about 20 years ago. Or so. Give or take.

My dad was born in 1945. He has a picture of himself as a baby, being held by his great-grandmother, who was 85 years old at the time (see picture at end of post). So she was born in 1860. America is a young country.

World leaders in the late 1700s said that representative republics were too unstable. America would never last. Once the citizens realized that they could vote themselves rich, then the game was over. Perhaps they were right.

Or, perhaps they were wrong. Perhaps Americans will recognize that America is the greatest force for good that the world has ever seen and will endeavor to preserve her, warts and all.

Or, perhaps, Democrats will continue to win elections a week after they happen via mail-in ballots. We grow weary of pressing the issue. It would be nice to take a break from it all. Why can’t we all just get along?

In the future, those who read the history of our era — say, from 1950-2050 — will wonder why we actively destroyed the greatest force for good the world had ever seen. But they won’t understand how tired we were. Tired of the daily struggle. Tired of getting fact-checked on Facebook. Tired of the condescension from our masked neighbors at Kroger. Tired of pretending to believe the unbelievable. It’s easier to just go along to get along. Why can’t we all just get along? 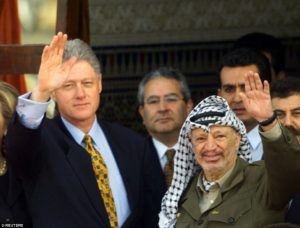 You may not care. After enough bourbon, maybe I won’t, either. Although that amount of bourbon continues to increase. I can’t tell if it’s from increased tolerance to ethanol or from decreased tolerance to absurdity. I suppose it doesn’t matter. But as things get increasingly absurd, it’s getting harder to care about daily events. I try to care. I really do. But sometimes, it’s hard to care.

But our great-grandchildren, who have not yet been born, care. Or rather, they will care.

Note that I didn’t ask if it would be difficult or not. I just asked where we would draw the line. They may ask who won. They won’t ask about degree of difficulty. 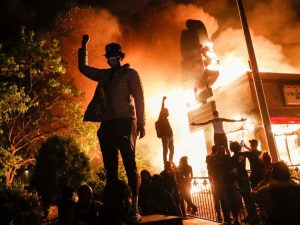 Somewhere, there is a point of no return. I think we passed it some time ago. Others feel that it is close, but not yet upon us.

I don’t think it matters who is right. We should act as if our decisions matter.

For one thing, when one believes that one’s decisions don’t matter, one tends to make bad decisions.

But more importantly, you never know. You may be playing from behind. But you could possibly win. You never know. So you play until the game is over. And our game most certainly is not over. Things may seem difficult. But this is not over. Maybe soon. But not yet. Perhaps.

And if we’ve already lost, then we have nothing to lose, right? So we might as well keep playing as if we have something to play for. You never know.

One benefit of losing is that it takes the pressure off. The favorite should win. They have every advantage. But the underdog feels no pressure. They just play. And you never know how things might turn out.

Happy and successful people are often blessed with an ignorance of their own limitations. They should lose. And they usually do.

So you might as well keep playing. You never know. 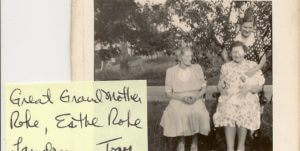 It’s easy for me to say this, as I was born only about 20 years ago. The idealism of youth, and all that.

On the other hand, my dad’s great-grandmother (pictured at left, holding my father) might find this to be important. Perhaps she has a perspective that some of us young kids lack. Imagine what she went through in her life. Perhaps she worked through difficulties that many of us wouldn’t understand. Perhaps she is less understanding of our fatalistic outlook.

You never know. Perhaps we’ve already lost. Our efforts could be futile. Hard to say, I guess.