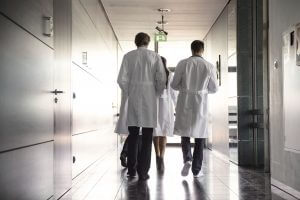 After medical school, I did my post-graduate training at a hospital in Tennessee. There was a dominant family in that city’s medical community – the “Smiths.” The original Dr. “Walter” Smith had retired ten years before, and now three of his sons were big shots in the hospital he had helped build from a small local hospital to a 400-bed regional medical center. Everybody talked about how brilliant Dr. Walter was, and his sons were top-notch docs as well. They played a big role in my training over the next few years.

The oldest son (Dr. “David” Smith) sort of took me under his wing. He thought I showed great potential, and we enjoyed working together, even though we occasionally butted heads. I generally followed his lead and very much respected his expert counsel. But I was young and arrogant, so I sometimes struggled to just shut up and do as I was told.

During an argument during a Code Blue, he once screamed at me (in front of a bunch of nurses and staff), “Just because you’re a genius doesn’t mean you’re always right, Mr. Hotshot!” I screamed back, “Just because you’re old doesn’t mean you’re always right either!” He was in charge of the code, so I just shut up and followed his lead after that. But I was pissed. So was he, obviously. The patient ended up dying, and after the autopsy, it turned out that his diagnosis had been right, and I had been wrong. It didn’t matter in the care of the patient — there was no chance the patient could have survived regardless of what we did. But I felt horrible. I later apologized for my arrogance, and he graciously accepted my apology. I was so incredibly relieved.

Anyway, despite our occasional disagreements, he thought enough of me to keep working closely with me — I learned so much from him. One day, he came up to me at the nurse’s station and said, “Hey Bastiat. My Dad is in the nursing home with Alzheimer’s. Because of who he is, they say they’re giving him really good care there. But I don’t trust them. Do me a favor and take over his care for me, would you?” I was flattered that he would trust me (over all his partners and colleagues) with the care of his father, the venerated Dr. Walter Smith. So of course, I agreed.

On my first visit, I found Dr. Walter walking up and down the hall of the nursing home, giving out M&M’s to the patients. He thought he was still rounding on patients in the hospital, and he thought the M&M’s were pills. I looked at the nurse, and said “Please shoot me if you ever see me…”

But the nurses kept buying him bags of M&M’s. It kept him out of their hair, and the other patients liked the treats.

It was painful to see a respected physician reduced to such humiliation. He should be remembered as a brilliant physician who saved lives, not some crazy old guy who thought candy was medicine. My God. Even now, nearly 30 years later, I can’t get that image out of my head.

I didn’t think that they were doing a great job with his medical conditions, so I changed things up quite a bit. I spent several months tuning things up, making everything perfect. But it didn’t matter. He continued to deteriorate, and he died a couple of years after I took over his care. David and his brothers thanked me for my efforts, futile as they may have been.

When I completed my training, Dr. David asked me to join his medical group. I declined his generous offer because I wanted to start my own practice. He thought I was making a mistake:

“Starting a practice from scratch in the days of Medicare and HMOs is impossible. Don’t let your stubbornness and your arrogance lead you into an impossible situation.”

Me: “I’m not being arrogant. I’m sure this will work.”

Dr. David: “How can you possibly be sure?”

I called him once in a while, but not like I should have. My solo practice did well, I got busy, and I sort of lost touch with him over time.

Several years later, a colleague of mine met with me and said, “Hey Bastiat – look, um… I know that you and Dr. David were pretty tight. And he’s a hero of mine, as well. I mean, he’s brilliant, obviously. But look. He’s losing it. He’s making too many mistakes. Some days he says stuff that doesn’t even make sense. He’s going downhill fast. The hospital is starting to get nervous.”

Colleague: “And so did two of his uncles and a few other relatives. His younger brother is already in a nursing home.”

Colleague: “Right. But look – he’s sort of the king of the hospital staff, you know? He can be a bit aloof – even arrogant sometimes. A few of us have tried to bring his mistakes to his attention, or point out something that wasn’t right, but he just dismisses us without even listening. I really think he can’t see that anything is wrong. But I’m telling you, he’s going to hurt somebody. He’s making too many mistakes.”

Colleague: “Why don’t you talk to him? He always thought you were brilliant. You’re one of the few residents that came through here that he really respected. If you talk to him, he might listen.”

Me: *pause* “…and I’m not on the hospital staff anymore, so there’s no downside to me pissing off some important people…”

I had moved to a nearby town, and was out of that hospital system now. So this really wasn’t my problem. I just wanted to walk away. But I also didn’t want my friend David, who had helped me so much in my development as a doctor, to be remembered as the old demented dude who played doctor while his colleagues tried to cover for him. He should be remembered better than that. So he needed to stop.

At some point, we all need to stop.

And to be fair, it can be difficult to recognize when that time comes, exactly. Especially if you have Alzheimer’s disease.

So I met him at his house one Friday night. We sat in his living room and chit-chatted about stuff, had a lovely visit. I told him how much I admired him, and that he was a great doctor and a great teacher, and that I could never repay him for all he had done for me. I also apologized again for any times that I offended him. He said nice things about me. And then I took a deep breath, and laid the hammer down:

“Look, David. I’ve been talking to the other docs. They say you’re getting Alzheimer’s, like your Dad and everybody else in your family. You’re starting to make mistakes. Lots of mistakes. Simple mistakes. You need to retire. You’re in your mid 70’s. Your mind isn’t what it once was. It’s time to walk away. Congratulations on a brilliant career. But you’re done. You need to stop.”

Me: “David, they’re doctors. They know what Alzheimer’s looks like. And they’re the ones trying to correct your mistakes. Mistakes that you never made before. Come on, David. You need to walk away.”

Me: “Can’t you see that I’m on your side here? Do you want to be remembered as a brilliant physician, or as a doddering old fool? Go write books or something. But no more patient care. Please. You’re going to hurt somebody.”

David: “I’m not quitting. End of discussion. Get out of my house. Now.”

He gave me the most cold stare. It hurt.

I paused, took another deep breath, and said, “Look, David. You’ve got until Monday afternoon at 5 p.m. If you haven’t withdrawn your hospital privileges and your medical license by then, I’m calling the state medical board myself, and asking them to do an evaluation. I swear to God.”

Me: “You can join me while I make the phone call on Tuesday morning if you want.”

He just stared at me for a moment, then launched into a tirade of screaming obscenities and insults. I walked out while he was still screaming at me, got into my car, and drove away with tears in my eyes. I looked back and saw his wife watching me from the kitchen window. She was weeping. She must have heard everything.

On Monday, he canceled his hospital privileges and his medical license. The brilliant career of David Smith MD was over. Just like that.

There wasn’t even a write-up in the local paper. He should have had a parade or something – at least a big glitzy dinner to celebrate the king of the local medical community retiring – but he just sort of quietly disappeared from the medical scene.

Over the next couple months, I got several phone calls thanking me – including one from his wife and three from other family members. They didn’t know what to do at the time, either. Soon thereafter, his son had to take over his finances. Sometime after that, he was in a home.

I called him a few times. He wouldn’t speak to me. I wrote him a couple of letters. He didn’t respond.

He never spoke to me again.

Dr. David Smith died last week, of Alzheimer’s disease, in the same nursing home that his father Walter died in.

I tried to help Walter and failed. I tried to help David, too. And it feels like I failed at that as well. Maybe I succeeded in helping David, I guess. But it sure doesn’t feel like it.

I hate to remember him like this — my last image is of him screaming at me in a bloody rage from his front porch. It hurts to know that that’s how our relationship will end. I can’t fix it now.

All I know is that this hurts.

And now, it always will…