I attended my first Child Bridge meeting in . . . when was it?  January 2017? 2018?  The big Covid cancellation gap is fogging up the details.  Anyway, I had called one of the organizers to discuss doing something with books and foster kids, something that would involve reading to them. Because reading to small children is crucial–it’s one of the best ways to nurture their development. And because I loved reading to kids.  Also, because I loved buying kids’ books, and my children had long grown out of them. So the project was born.

What would that project be? The childcare activities organizer for the monthly Child Bridge meetings wasn’t sure. Child Bridge, according to its mission, finds and equips foster and adoptive families for children who have suffered abuse and neglect.  Just how my reading project would fit into this wasn’t clear, but every second Monday evening, while the parents met around tables in the quiet, enclosed room near the gym, the kids played alongside their agemates and ate pizza. Guests were often invited to bring in wildlife, or do an electric company demo, or direct a special craft.

The organizer decided that I could be slotted into the schedule as the story lady. That was one thing I could do.  I’d go to the library and pick out books for different age groups, then show up at the church around 6 p.m., go through the line to get my free dinner along with the parents–meeting dedicated foster couples along the way–and then walk the halls with my bag of stories and read.

I read to the youngest children at first, and as long as I kept it to one or two engaging volumes, the little ones were attentive and made the cutest comments. In those early days, I helped with some of the childcare, too, and I have a lingering memory of a long sunlit evening early in May when the weather was pleasant enough to take the kids outside and push them on the swings.  Eventually, my reading expanded to include all age groups, and even though it’s a little awkward walking into a room of teenagers to read a bit of Tolkien after distributing coloring pages of Gandalf, Aragorn, and the Balrog, I think they get something out of it. Later, I added vocabulary activities to go with the stories, and one night, a sculpting contest accompanying a Narnia passage.

But the read-alouds were just the half of it.  The organizer and I conceived a book giveaway idea where each kid could take home a book to keep.  The idea was to create anticipation and nurture interest, to encourage a love for books and reading. Now I had an excuse to raid thrift stores and garage sales for attractive volumes with beautiful illustrations, to buy up all the second-hand Ramona stories I encountered, and collect chapter books and novels.

The plan from that first Monday was for me to set up a table of wares in a high-traffic area.  I bought bins and labeled them by four age ranges, and since then have always sorted the books that way. A fifth category is “Classics,” all-important for helping a child internalize cultural references.   I always felt that the books should be like new, and the table should be as attractive as I could make it, given my limited instincts for indoor decorating.  Books from thrift stores might get a good once-over with sanitizer, especially interactive infant books, for obvious reasons. Over months, the organizer and I refined our approach by adding more signage and some parent resources related to the practice of reading aloud–these were just old Ricochet posts repurposed as handouts.

I’m not sure what happens to the book kids take home, but surely there are many that get read. Over many Mondays, I’ve met dedicated parents who are adopting and fostering children, often alongside their biological kids. Sometimes it’s the mom who comes up and browses the books; other times, I interact with whole families.  Parents often offer to weed out their collection at home and donate the unread items for the cause, but follow-through is rare–people often forget, probably right as they leave the building. And then, of course, kids say and do sweet things–like the time a tiny boy of about eighteen months toddled down the hallway with his precious book selection under his arm.

Some of the most satisfying scenes come from the adopted kids of Child Bridge event staff. One little boy would hang around with his skateboard while his mom was finishing up and then pick out his book at the very end, a little timid in his exchanges with me. One evening, his mom sent me a text saying, “Look what you did for my son.”  Accompanying the text was a picture of him ensconced in the car’s back seat, absorbed in his book. It’s not always easy to get active boys to settle down and read, and I suppose it helped him to have books featured on these evenings.

More recently, I added two tiny orange Gideon Bibles I’d found in my house to the “Classics” bin.  Leaving the face painting and game tables, a small daughter of the now-former organizer walked up to ponder which volume she’d take home. Finally, she settled on the bright orange book. “Because everybody needs a Bible!” she said. Next, her twin, with identical looks but a different manner of speaking, appeared at the table. She didn’t take long to decide on . . . the other Gideon Bible. Twin studies! Both girls had skipped off with their “New Testament, Psalms, and Proverbs” in hand. Their mom explained that they’d been talking about Bibles in Sunday school, which explained their delight in discovering they could have their own mini version of the Scriptures.

One adopted kid I know from church, whom I like very much, listened to a read-aloud about a dragon and a good-night kiss and said, “I want that book!” He was thinking of the giveaway table, but the volunteer caregiver, who was newer, didn’t know how to respond. I told her it was okay, and said that I would keep it at the table for him. Sure enough, he appeared with his dad and the usual entourage of small children and requested the story.  The dad said something quiet like, “Ah, something special, huh?” Then came the messy process of helping the siblings pick out their books. He set the book bin on the floor so the two-year-old girl they were fostering could see what was there for herself as he crouched down and talked to her gently. The young man and his wife had picked a challenging road, that was for sure.  But there was joy in the mess. 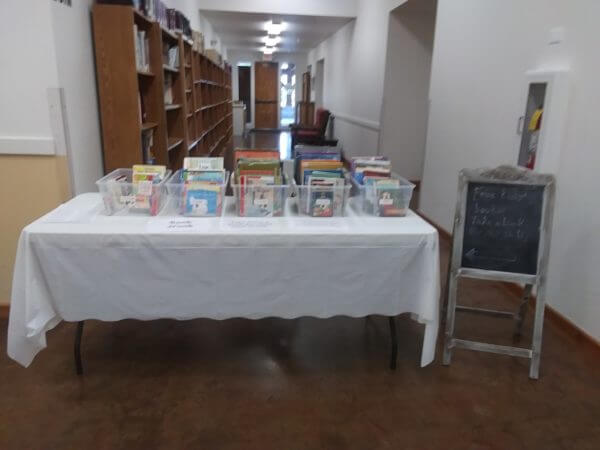