Ben, on the right, always seemed to have a cigarette in his hand. So did I, but I never looked as cool as Ben. That’s El Duomo in the background. We were visiting Florence at the time, on leave from our post in Germany, sometime in 1959. 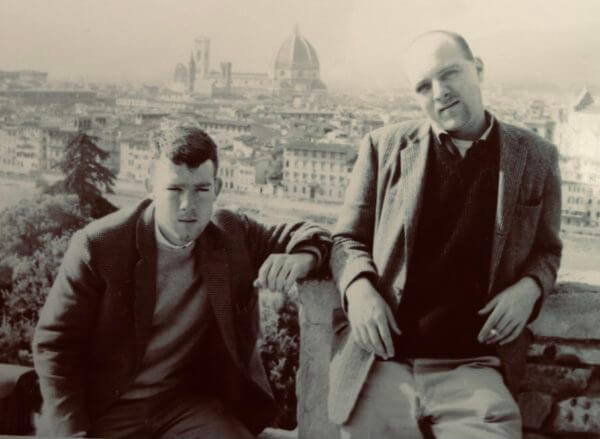 Ben and I seemed destined to be good friends. After being drafted, we started basic training on the same week at Fort Ord, Ben down from San Francisco, me up from Los Angeles. After Basic, we ultimately ended up in a Signal Corps outfit in Germany to serve out our two-year obligation.

In Germany, we were both assigned to Headquarters Company as clerk typists and office gofers.

So we became best buds. I think we considered ourselves “outliers” in this foreign Army environment we found ourselves in. Actually, Ben was the true outlier. Smart as two or three college professors combined, Ben must have felt himself apart from his fellow soldiers, including the sergeants and officers above us, though he never came across that way. I was just along for the ride and profited from my association with Ben. People thought I was smart because Ben was so smart.

Here’s how Ben was important in my life. Growing up in Compton,  I didn’t have a single friend who did well in school. Of my two best friends, one became a sheetrock installer and one became a professional gambler. We were good pool shooters and better bowlers, clumsy shoplifters, and all-around bottom-feeding juvies. We all agreed that school sucked big time and that those who studied and did well were weenies.

By contrast, Ben grew up in a Jewish tradition that valued learning. Ben was going places. He told me once that his family would sit around the dinner table at night discussing the news and ideas of the day.

Man, that seemed exotic to me. Our family discussed the meatloaf when we said anything at all. My dad, with an 8th-grade education, worked in the oil fields. One of Ben’s relatives was the famous labor leader in New York, David Dubinsky, who hobnobbed with presidents and governors.

So when Ben and I would be on leave in Italy or France, Ben was like a docent to me. We visited the museums of Paris and Florence, taking in the paintings in the Louvre and the art in the Ufizzi Gallery in Florence, the heart of Italian Renaissance art. I even learned to pronounce Michelangelo’s David as Daveed, Klee as Klay. After a time, I wanted to be like Ben.

Here’s the interesting part of this story. After our service was over and we were back in the States, Marie and I visited Ben. Ben was living with his boyfriend in his parent’s home, one of those archetypal upper-class San Francisco townhouses. Ben was gay. I had no idea. Sounds unlikely, doesn’t it, that I could be so naive? But it was a different time.

Later, Ben visited me in Compton, a city of gated windows, used car lots, and a growing gang presence in the projects. Compton started out ugly and grew uglier through the years. It reached its peak of danger and ugliness during the “Straight Outta Compton” years of the ’80s. I saw my hometown in a new way, through Ben’s eyes, and I saw that Compton was a blighted town. I never knew. It was just my hometown.

As I said, I didn’t know Ben was gay. It was only later, when I was older and looked back that I could see signs.

Ben must have recognized that I was confirmed heterosexual, right down to the soles of my feet. When we took those trips around Europe, we slept in the same room (and once in the same bed) and I was never uncomfortable, and Ben never made a move. (It might have been that I wasn’t cute enough to make a move on, but I don’t want to think that. I kid.)

Postscript: I don’t think Ben is still alive. I’ve made numerous futile attempts to locate him. He might have perished in the San Francisco HIV epidemic that spread through the bathhouse and bar scene on Castro Street.

I wish I could talk to Ben one last time. I would tell him how much he meant to me. I’m pretty sure that, at least partly because of Ben, when I got out of the Army I didn’t return to my job as a telephone installer. Instead, I returned to college and ended up a college professor that, whatever else you might think of it, is a very good job. I also learned to appreciate art, literature, and the life of the mind, a habit that has enriched my life and has given me much pleasure through the years.