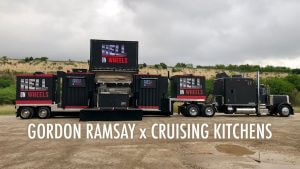 Gordon Ramsay may be a master chef, but he greatly overrates his own expertise in helping struggling businesses recover. The tragedy is that no one wins in these encounters, and he demonstrates the delusions that emerge from his arrogance.

Ramsay is known for his nasty temper as a master chef, although he shows his ability to charm people in another show as he travels internationally to learn the cuisine of other countries. The irony is that in that show he allows at least a week to pick up the basic knowledge and techniques of that country.

But a few years ago, he decided that he could also rescue troubled restaurants with the expertise he’d acquired in running his own businesses and creating successful menus. I was spared watching this most recent production, “Gordon Ramsay’s 24 Hours to Hell and Back,” until recently; apparently the producers decide season by season whether to renew his contract.

Why is this particular show so pathetic and outrageous? Ramsay’s strategy involves somehow setting up secret cameras in a restaurant; the resulting videos are supposed to tell him everything he needs to know about the restaurant’s problems. After viewing these videos at his leisure, he shows up to tell the restaurant owners that he will save their business — in 24 hours. I’m serious.

Of course, he tries to impress them with his reputation to help him persuade them. In the episode I saw, the father of the family had died, and the son (56 years old) was put in charge. The son was in a constant battle with his mother about the management of the restaurant. But Ramsay was sure he could save the day.

After a 24-hour marathon of lecturing the manager, the grandson, and the restaurant staff; after teaching the grandson how to prepare a limited number of dishes; after getting the staff to work with renovators to give the restaurant a completely new look; after overhauling the kitchen; and after coaxing everyone (especially family members) to hug each other, they were ready for their reopening.

With their debut, the usual conflicts erupted, but Ramsay put out the fires to save the day. Overall, the reopening was a success. And Ramsay hopped in his truck, on to other desperate restaurant owners who want him to work his magic.

Three months later, the grandson/chef sent Ramsay a video of his father, who is acting out his old behaviors, yelling at and insulting staff.

It’s difficult for me to nail down precisely what I found the most outrageous about Ramsay’s efforts: his arrogance that allowed him to believe he could turn around a business in 24 hours; the havoc he wreaked on a family that was literally struggling to survive financially and emotionally; or his willingness to produce a TV program no matter the costs to his clients and their relationships with each other.

But mostly, Ramsay’s story is a harbinger for me, a metaphor for the disaster this country is facing. Many years have passed since the seeds were planted by an arrogant elite to infest this nation with the virus of socialism, just as small businesses can be weakened by their own naivete. Our political infiltrators have pursued their goals with unmitigated arrogance, invading our schools, the government, the corporations, and the media. The results are in full flower, and many of us wish there were an easy way to quash their efforts.

The first thing we can learn from Ramsay’s story is that the issues of that restaurant were a long time in the making and its origins with all its problems were planted long ago, in early family dynamics and tensions. In government, both political parties shrugged their shoulders over the years as they watched invasive growth taking over every healthy seedling that could have stopped the invasion. And now we want a remedy that will kill the entire infestation. Now.

We must take responsibility, all of us must, for where we are.

We must realize that correcting our path and removing the elite jungle forces can’t be done overnight (as in Ramsay’s 24-hour promise). But in our case, every one of us who recognizes the problems can choose to see ourselves as mentors to those who are just waking up. As hard as it might be, we must be patient. We must realize that, just like a failing restaurant, the problems were planted long ago, and it will take consistency in word and action to make this country what it was intended to be, what it deserves to be. We mustn’t act like the elite on the other side and act as if we have all the answers. In fact, we need to encourage those who might be “turning around” to offer their own input and help them believe that they can be part of the solution. When we look at the schools of Loudon County, that is precisely what they did. They spoke up out of anger and fear, not arrogance. People on the left and the right joined together to protest the outrage of those who have corrupted, and wish to continue to corrupt, our schools. Everyone can have a voice and a say, as long as we all keep the ultimate goal in front of us:

We are fighting for freedom.

We are fighting for our future.

We are fighting for our country.

And we can do it by combining humility with strength and our fears with courage, and remember our love for the United States of America.

Published in Politics
Tags: arrogance, clarity, Humility, patience
Ricochet editors have scheduled this post to be promoted to the Main Feed at 7:33AM (PT) on January 17th, 2022.