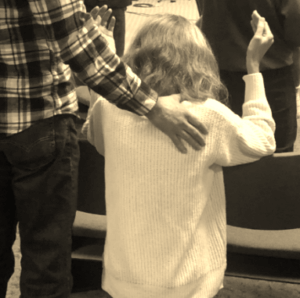 I went to a healing meeting with my wife and it was as atrocious as I expected.  Nevertheless, I was happy to be there because it beat sitting home alone on a Friday night with a wide-open internet.

I don’t have a particular dog in the fight around the theology of healing.  I’ve heard the stories of the near-death woman over whom the church gathered for intercession and there she is now singing in the choir.  And I’ve heard stories that went the other way.  I can’t argue with someone’s experience.

Further, I would never fault a person for grasping at any kind of hope in times of distress and uncertainty.  Recently a young boy had a dreadful accident and was near death.  I received frantic emails and texts that it was now time for the church to rally and pray in order to see a miracle.  A special service at a local faith-healing church was quickly organized.

When the boy died, there was another glowing email stating that the prayer indeed was answered because in death, we get absolute healing.  This is not the time, of course, to point out the dubious sleight-of-hand language trick or duplicity in logic.  One must quietly listen and let the family work out their grief in their own way.

Nevertheless, this was just another example of a pattern I have seen repeated over and over again and it goes like this:  If you do x, then God will do y.  Over my fifty-year travels in the Evangelical world (and some travels into nearby religious neighborhoods) I have seen different versions of this pattern.

Even looking across the street at the rosary, a beautiful Catholic tool to meditate on several points of the gospel, one will eventually stumble upon a website where it is clearly stated that if you pray the rosary for 40 days, Mary will make sure your prayer intention gets answered.  If you do x, then God will do y.

The healing meeting I attended with my wife was yet another version of this Christian once-for-all Triumphalism—if you do x and then God will do y bringing you triumphantly into a new state of being.  The leader maintained that the biggest crisis and problem we are facing in the church today is that we are unaware of “who we are in Christ”.  What he meant by this is the teaching that believing in Christ identifies the believer with Christ to the extent that what happened to Christ is efficacious to the believer and, in turn, God works through the believer as if the believer were Christ.

If we master this belief and make it our own, then God would respond and in this new state of being, physical healing would be spontaneous and automatic.  He went on to pepper his talk with examples of random encounters he had with people in airports and restaurants and shops who had miraculous results because he brushed by with his head and heart aligned with who he is in Christ.

This is all well and good, of course, as long as one holds it in a theoretical way as was evident by the serene smiles and affirming nods of the message-friendly audience who had no intention of rushing out as community faith healers after the meeting.  I as well thought his stories funny and entertaining in the same way watching the Mighty Ducks miraculously beat the sinister, black-uniformed, Russian-accented, Icelandic team makes for a feel-good evening.

But there were people at that meeting who were really sick.  In front of me was a woman with cancer kneeling in desperation as people around her put their hands on her and began to make demonstrative prayers ordering the cancer to leave.  To my left was a noisy, disruptive, Down Syndrome child and the mother who cared for her with similar intercession.  Interspersed in these spontaneous groups of prayer was a pastor from another healing meeting who walked around asking people about their shoulder pain.  He seemed to have some success when praying for someone with a shoulder pain of “eight” when his intercession reduced it down to a “three” – whatever eight or three means at any given moment.

I hope God really healed them.  I hope God heals everybody.  But if this “if I do x then God does y” scenario being taught really worked and children’s hospitals were being emptied and patients were rising from their cancer beds to return to work, you would think it would turn heads and make the news like it did in Jesus’ day.

I wondered about the woman in front of me with cancer if her husband would one day be speaking at her funeral saying that the prayers were answered because his wife is now completely healed in heaven.  I wondered if the mother of the Down Syndrome child would one day crack overwhelmed by the prospect of taking care of a special needs child for the rest of her life, toss her Bible in the trash, and say, “to hell with it.”

Some weeks later, I talked to a friend who attended the healing meeting.  He and his wife attended the whole weekend while I opted to work in the yard on Saturday and go to my own church on Sunday.  He said that Friday night was good but Saturday afternoon was even better.  It was tremendous.

I wondered what he meant by that.  Did he mean that the speaker’s method of effective ministry took hold of my friend’s heart with such clarity and vision that he began to live a life of proclaiming God’s kingdom of definitive power and resurrection?  I knew my friend and his sedate lifestyle enough to not bother asking.  He simply liked the stories told Saturday night better.

Religion in general, and Christianity in particular, teaches us to pray.  It isn’t always clear why but the directive is unambiguous.  Leave it to us moderns, to turn it into something where we control God.  We can split the atom, after all, and create complex, self-driving cars.  Certainly, we can puzzle out the right formula to get exactly what we want in prayer.  There has to be a cause and effect somewhere.  There has to be an x I can do in order to obtain y.

The best advice concerning prayer I can give at this juncture is to ask God for wisdom that each day and moment, we may understand what His will is and be inspired to do the next right thing.  We pray that God gives us the strength to do the things he expects and what our responsibilities demand with an attitude of humility and trust.  We relinquish sin and resentment and fear replacing it with gratitude and acceptance.  We pray for others, holding the results with hope and expectation but loosely in order to gain a greater empathy and compassion for the needs of others.

And if in God’s wisdom and providence it happens that a miracle is to occur, it will find us.