He was smart. With a friend from middle school, he shared an interest in astronomy, producing a newsletter (Stargazing Monthly) and eventually building a telescope and observatory on the property of one of our schools. When the time came, he chose to attend Biola University in La Mirada (Blah Mirada, to Marlin), majoring in psychology.

His problem was the hole in his heart. Or rather in a heart valve. He had endured several operations, a decrepit valve each time replaced by a porcine one. This surgery was the last, and a modern artificial valve was installed. The surgery was successful.  As his recovery progressed, Marlin was invited to attend a meeting of his doctors. At that meeting, he suddenly sat up, and then his head fell to the table. An unseen infection brought stopped his troubled heart in his 23rd year.

Then came the funeral. I had been on the road, and traveled four hours to gather with fellow friends at the plain wooden church of which Marlin was a member. This was my first funeral for a friend.

It was horrible. The pastor, bless his heart, didn’t know Marlin. He couldn’t have; not the way he spoke about him. Marlin, he said, was a pious and faithful youth. We can’t understand this tragedy, he said, but be assured, Marlin had all the virtues one could hope to find in a Christian young man, especially during these vexing times. In short, Marlin was a good kid: loyal, obedient, happy, loving, faithful. I don’t know whether his parents took comfort from these words, but I know for a fact that they didn’t describe Marlin.

It wasn’t that Marlin didn’t possess these virtues in some part, but the unremitting picture of a juvenile saint was just plain wrong. The Marlin my friends and I knew did not just possess the sarcasm of adolescence; he was sardonic, cynical, and mordant. He cast a gimlet eye upon politics, religion, education, culture, and society in general. He was deadly and grim in his analyses. I can see his knowing grin and impatient eye-rolling even now.

Now, I think that as he lived his life, hobbled by infirmity from the joys of exuberant youth, Marlin was destined to hold this point of view. Underneath was always kindness, and even Christian optimism. But every day he lived was another day when he could not run and play with the other kids, when he was, for long periods, home-bound, and special in a way he did not desire and could not control. Girlfriends, children, family: all were vague and probably unobtainable futures. How could he be other than what he was?

But that Marlin didn’t show up for his funeral. The hagiography was galling; I think not only for his friends, but for everyone there. Perhaps this sort of thing was part of the culture of that congregation. As a late adolescent myself, I could only see the hypocrisy. Good Lord, at least say something true and honest about him. My prayer went unanswered.

After, my friends and I met, and over a soda corrected the record. It was a kind of salve for our broken hearts and our misplaced anger.

Marlin’s death changed me; it was my introduction to the mortality of even the young. His funeral changed me, or at least fed my adolescent disgust with cant and hypocrisy.

This January 23 will be the 41st anniversary of Marlin’s death. Since then I have not only been to many funerals; I have officiated over hundreds. Some were for those I didn’t know. I pray I have been honest; I know I have tried. I’ve learned that it’s not such an easy thing to do, and perhaps have learned more about grace in those 41 years.

But it seems meet and right to remember that funeral, and through it, my friend. And it seems right to look forward to our reunion one day, when we can laugh at the fools we were, and revel in the joy that is.

And I heard a voice from Heaven, saying unto me, “Write: ’Blessed are the dead who die in the Lord from henceforth.’” “Yea,” saith the Spirit, “that they may rest from their labors, and their works do follow them.” – Revelation 14:13 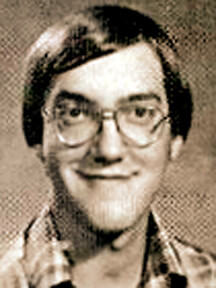