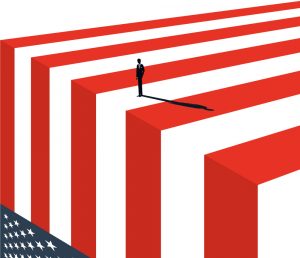 Why is America eroding? Why does it seem like we can’t get “unstuck” from the inevitable cycle of decline? I believe it has to do with what we might not yet identify as the real enemy of our Republic. The truth might be uncomfortable. And what we might fail to remember is real freedom.

What do we hold in common? Is it enough to sustain our freedom? Or is our freedom eroding because our loved things held in common have been debased—or are vanishing?

When a free people “love things held in common,” they gain enriched, unified identity. This higher way of life spelled the doom of lesser things, like tribalism—identity politics—in which nothing is loved or held in common.

Victor Davis Hanson notes, historically “ancient tribal loyalties slowly eroded” in the face of the onset of freedom and free citizens. “City-states of stationary peoples insisted on demarcated borders. Inside them, unique laws, customs, and traditions for generations united the citizenry, made them distinct from their neighbors, and ensured civic solidarity and security.” The key, therefore, to “loved things held in common” are the customs and traditions that unite a people and empower them to live in harmony. Customs, therefore, have moral content.

American customs and the traditional morality of the West more generally has certainly eroded.

Os Guinness presents his view on three enemies that erode freedom. First, the external menace of superior military forces, of course. Invaders can alter a society overnight. (Might we add in pandemics?) His third menace is time. Guinness quotes Abraham Lincoln: “The silent artilleries of time are ruining the ramparts of the republic.” I focus on his second enemy to freedom, “the corruption of customs,” an observation by Greek historian Polybius.

Customs, tradition—those loved things held in common that give center, identity—are threatened by corruption. The corruption of custom, in turn, erodes freedom. Now, customs include a lot of things, but surely the heart of it is the moral code that does two things. First, it answers How ought we to live? Our precious traditions reveal the purpose of human life and human death and the meaning of human existence. Religion most especially gives these answers and is marginalized in the public square.

The second thing moral tradition does, based upon the first, is enable a pluralist society to live in harmony and peace. This is not trivial. I think Jordan Peterson said once that tradition keeps each individual from needing to reinvent the wheel for how one ought to live. Morality sustains a free society. This is not trivial. Only a virtuous people has the capacity to hold on to freedom.

The greatest sustainer of freedom is custom and its inherent moral guidance for how we ought to live. If freedom is eroding, then our customs have eroded. And if our customs have eroded, so has our moral compass. And if moral guidance has decayed, then we must expect deeper questions of the purpose of human existence to go unsatisfied. We expect disputes over bioethics. We expect rises in suicide, abortion, euthanasia, mental illness, and crime. These are all the surface symptoms of a dying heart. Our “loved things held in common” are vanishing or debased.

But what has caused this? What exactly has eroded freedom? The answer is the paradox of freedom itself. It is a cautionary—and uncomfortable—tale. Os Guinness points out that the greatest enemy of freedom—is freedom.

The deepest level of analysis here is on the moral and spiritual dimension. Guinness is not inventing the idea that freedom is its own enemy. This paradox has long been recognized.

Victor Davis Hanson reminds us that “Ancient authors from Plato and Aristotle to Petronius and Tacitus have suggested that affluence combined with leisure paradoxically creates a laxity that leads to the kind of societal and institutional disintegration we are currently seeing.”

Guinness explains that freedom requires not only ordering in the political sense, but the ordering of the heart, starting with self-restraint or self-discipline. Now there is self-restraint imposed by political (i.e., governmental, police, legal) forces from the outside. This is the inferior type. The superior type, moral self-restraint, is a virtue that cannot be legislated or coerced. It is won as a type of spiritual victory. It is won from within by personal effort. Speaking more deeply, self-control is gifted by divine grace in response to our effort.

These matters indeed trade in the philosophical and religious. Those are two areas that are dissolved or debased among our “loved things held in common.”

The heart of the freedom paradox is this: It is precisely moral self-restraint that becomes endangered when freedom flourishes. This is the Paradox of Freedom. This ties into “the corruption of customs” that our ancient fathers warn is the vulnerability born from prosperity, affluence, luxury, inflamed desires, and political and financial power.

The Paradox of Freedom is that freedom undermines itself as it moves away from moral self-restraint, down to permissiveness, and finally nose dives into rank licentiousness. We may recognize rank licentiousness in the actions of others. It is easy to criticize. If we are honest, we recognize it in the tendencies and inclinations of our own hearts.

Perhaps that which we fail or refuse to identify as the real enemy of our Republic is entertainment, indulgence, luxury, and out-of-control desires. That cultural observer of early America, Alexis de Tocqueville, was afraid government dependency would result in the perpetual adolescence of its citizens. He feared adult infants would be incapable of self-reliance. Of course, he was right. If you make more money staying home on the government dole, why work? This is the weakening of moral resolve. In like fashion, perhaps we have become a nation with the moral maturity of toddlers. The entertainment-luxury version might be: If I get to binge-watch shows (or porn), eat whatever I want, and buy everything on credit, why live differently?

Why live differently? Because corruption of customs erodes freedom. And this corruption is fundamentally a corruption and decay of resolve that occurs in the human heart. As an effect, corruption of the heart spells doom for collective civic freedoms in physical space. During the many unpleasant affairs of 2020-21, we have seen the rapid advancement in our physical spaces what has already necrotized in our collective hearts for decades.

We have even gotten to the point of not being able to agree on basic facts of a public event—even if the entire event is captured on video. This disagreement over facts and not just interpretations should alarm us. Our five senses are no longer in touch with reality, and that spells doom. Heraclitus observed long ago, however, that “Eyes and ears are terrible witnesses for those with a barbarian soul.” Again, decay in the heart is the issue.

All this demands that we revisit what freedom means in the first place.

Rather, real freedom is the power to live as a human being ought to live. Freedom is a moral way of life. It calls us to divine summits of what it means to be human. Freedom is costly first of all in the personal struggle to live rightly. Only a virtuous people has the capacity to keep the Republic.

We must reconnect with our historic customs. Our religious traditions and historic American civic responsibilities guide us into how we ought to live. It is easy to say that person on the Blue Team is the enemy of the Republic. It is easy to vilify our neighbor as the problem. But the moral decay of the heart is the deeper enemy of the Republic. And all of us are culpable. I certainly am. Every time I lie or cheat or steal or lust in thought, word, or deed, I am the enemy of freedom. My participation in the corruption of customs is the real enemy of own and my neighbor’s freedom.

And just like I can, that member of the Blue or Red Team over there can repent and take up the mantle of our customs once again. Hearts can change, thank God. That is good news. We are each of us culpable, and that means we are responsible. Responsible means we have agency. We have the innate power of choice. We can choose to change wherever we find ourselves in life. We alone oversee our speech and behavior. We alone can turn the dial of our own thoughts. We alone can labor to discipline our sinful passions.

We alone are free in the soul. Real freedom is the power to do what you ought.

You might ask, How does this translate into those who refuse to live properly? How do I change or influence those who refuse to live as they ought? Well, first things first. We must inventory our own hearts to have the capacity to deal with others rightly. Our participation in moral customs is, frankly, nothing short of a form of spiritual enlightenment. It clarifies what public or civic action to take with others. An ascetic of the Orthodox Church put the case succinctly: “Acquire the Spirit of peace, and a thousand souls around you will be saved.” (St. Seraphim of Sarov)

So let us set aside the luxuries and indulgences we know drag us down and drown us in a sea of corruption. Let us steel our resolve and renew the highest loves we must hold in common for the survival of our Republic.