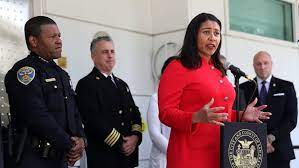 In an effort to follow through on her promised transition from defunding to refunding the police, San Francisco Mayor London Breed announced that the city would take a zero-tolerance approach to maskless shoplifting, promising stiffer sentences for those who fail to properly mask up when relieving stores of hundreds of dollars in merchandise the proceeds from which are then fenced and laundered before you’re back from lunch.

“Additionally,” added the mayor, “proper masking makes it more difficult for us to identify you, if you know what I mean,” winking a press cameras.

The mayor also warned prospective maskless shoplifters that social distancing guidelines must also be adhered to, warning that failure to “keep distance” may result in a limit on the number of shoplifters permitted to gather at one place.

At press time time, Mayor Breed has turned herself in after vowing to track down those responsible for the city’s spike in crime.