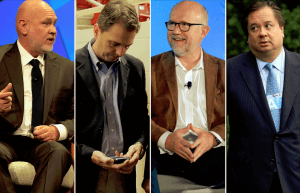 Satisfied that the men no longer proved a threat, I detained them by removing their khakis and shaking loose from the pockets two Blackberry phones and several green room credentials for CNN, MSNBC, and Al Jazeera. I ascertained that the two men represented the No Labels organization, the militant wing of the Lincoln Project. One of the men then confessed that they were “merely attempting to combat partisan dysfunction in politics and build a bipartisan governing coalition.”

It is hard to believe that in America in 2021, a principled conservative can’t walk the streets of Wyoming without risk of being assaulted by Deep State-adjacent, third-way political operatives.

That’s my story and I’m sticking to it.