Darling Daughter and her five older brothers did much of their growing up on a small farm in rural Missouri. Now she lives, when home, in a small town on the edge of New England, and in an even smaller town when away at school. She will graduate from college in a few months with a degree in Economics, and her dream is to move to a big city, earn a good income, and travel the world. Toward that end she’s been engaged in the job hunt, looking for something in finance that will land her in New York, Chicago — somewhere big and metropolitan and unlike the places she’s lived to date.

She called me on Monday, breathless and excited. She’d interviewed twice with a company in Chicago that was looking to hire a risk analyst, and had been hoping to hear from them. She called to tell me that she’d just received a (digital) package from the company.

I asked her what they said. She told me she didn’t know; she was too nervous to open the message. So, while I waited on the phone, she clicked on the email. It said they were making her an offer.

How does it look? I asked.

She didn’t know, not yet, so while I waited patiently she opened the attached PDF and read it. It was good — everything she’d asked for (and quite a lot for a 21-year-old not quite yet fresh out of school), and better benefits than she’d hoped. My daughter is happy, and looking forward to an enjoyable final semester.

As I sat listening to her, I thought of a similar occasion almost exactly 21 years earlier.

It was late October of 2000. I was working at a client’s office in Albuquerque, about half an hour from our home in the Rio Grande river valley south of town, when my wife called. (Thinking back, I can’t remember if I had a cell phone, or if she paged me, or if she just dialed straight through to the client’s office. Did I have a cell phone in 2000? No idea.)

She’d received the package we’d been awaiting for months. I asked her how it looked; she said she hadn’t opened it — she was too nervous. I told her to hand the phone to one of our three sons and open the envelope. Son #2, who was 13 at the time, took the phone, and I waited. There was a long pause, and then our son said “Mom’s crying.” I told him to pass the phone back to her.

Are you okay? I asked my wife.

Struggling to speak, all she was able to say was “She’s beautiful!”

Indeed she was. And that’s the day we first saw Darling Daughter, then seven months old and living in an orphanage south of Guangzhou.

I’m traveling at the moment, enjoying a New England airport weather delay, so I don’t have that adoption agency photograph with me. So here’s one from several years later, of Darling Daughter and Lucy. 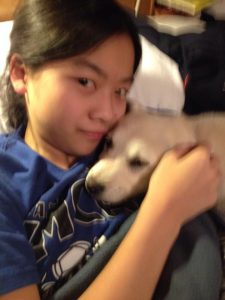