This could be a much longer post. but I will restrict myself to a premature eulogy for my beloved Microsoft Surface Pro (5) from around 2017, which annoyingly did not bear a version number (hint IT WAS FIVE) but instead bore simply the designation “Pro”, which was annoying, as there had been a Pro (1), Pro 2, Pro 3, and Pro 4, and it was followed by a Pro 6. Pro 7, Pro 7+, and Pro 8, while the Pro X is a separate product built around a different chip family (ARM, IIRC).

Simply calling this thing the “Pro” is a disservice unworthy of a company that presumably understands the importance of data integrity — each of the models mentioned so far should be considered a “Surface Pro”, while the number appended to each should serve to discriminate between all these Pros. So Pro (5) or Pro-2017 it is, and woebetide the hapless seeker of assistance or information who hasn’t yet become a freaking expert in Microsoft’s truly pathological naming schemes. 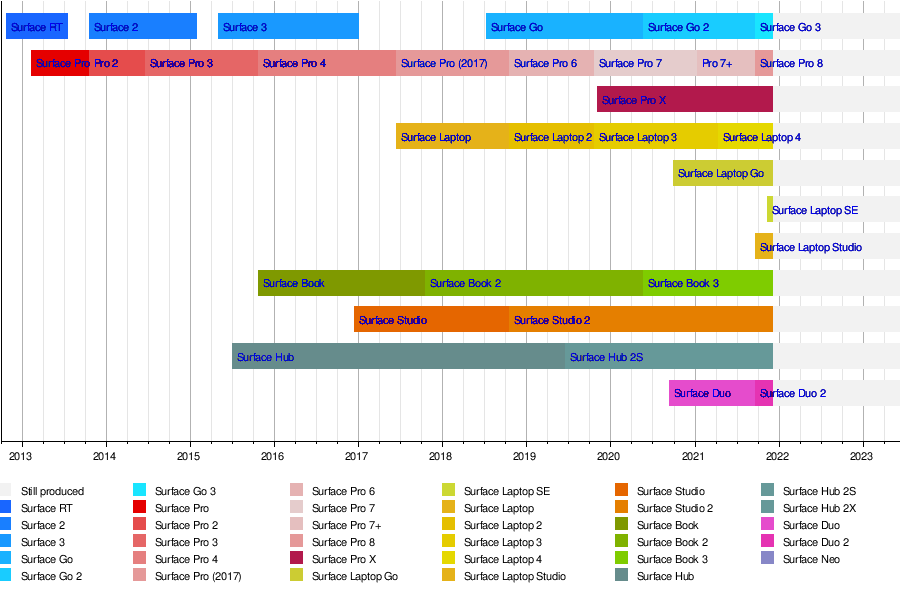 Incidentally, notice that there is (as yet) no Surface Pro 9, just as with Windows versions. Have you noticed that consumer MS Windows versions go 1, 2, 3, 95, 98, Me, Xp, Vista, 7, 8, 10, 11? I salute the shift to year-based versions — at least those are based on something, and are just as valid as serializing version (as in Win 1, 2, 3, and all of their subversions, such as the MAGNIFICENT Windows 3.11). So no complaint about year-based naming. The interim Me, XP, and Vista made little sense, but at least each had the good grace to stick around for a long time (XP) or a short time (Me which should have been called 98 SP 3, Vista which sucked) and at least be distinct from its respective predecessors or successors.  If you’ve used many of these, you’ll never mistake one for another once you get going.

But Microsoft has a problem in that software needs to know which version of Windows it runs upon. An easy way to do this is to query the OS for a version strong, and then filter it by some criteria.  This is an urban rumor in my experience, but it rings true: a LOT of software, some of which may be made by Microsoft (ahem!), simply gets the string, and if — like Windows 95 or Windows 98 — it begins with “Windows 9[…]”, then the software expects the OS to behave like the truly DOS-based 95 and 98 would.  After all, more modern operating systems (such as Windows XP) don’t respond to some system calls with DOS-style answers.  And that apparently is why there is no Windows 9 — What we know as Windows 10, if named Windows 9, would have told software that it was running on a 20-odd-year-old system (based on the foreshortened question asked), and to expect 16-bit options, to access no hard drives larger than 2GB, and so forth.  For those who get the concept but not the specifics, your hard drive is now specified in terms like 256GB at the low end (now measured at the TB level for middle and high-end drives), as opposed to back in the Windows 9x days, when enormous 2GB to 20GB drives were the province of nerds and data-hungry professionals. And you had to do some magic to get anything larger than 2GB to work with the system — it simply was larger than the system could comprehend, like saying “Meet me at exit 4,397 on Interstate 8,962.” 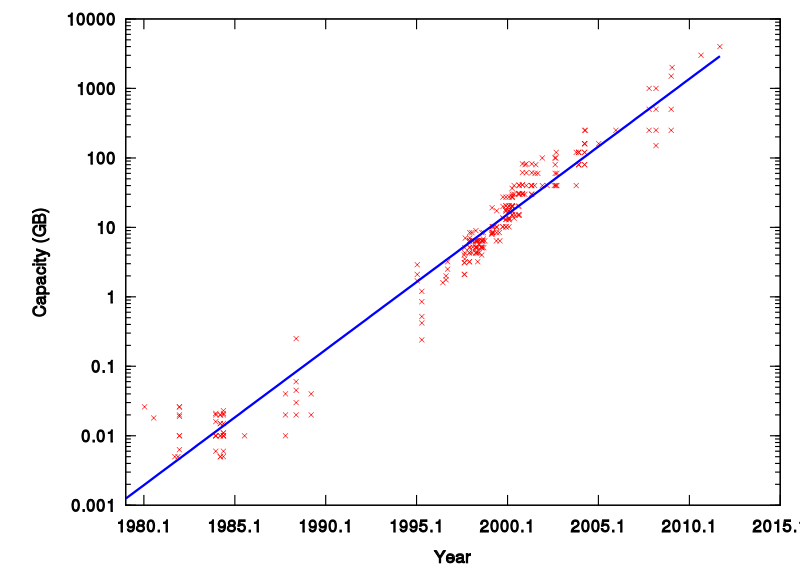 Logarithmic scale of HDD size over time according to somebody.

Ennyhoo, I have this Microsoft Surface Pro (ver 5, or 2017 or bqhateverw) which I simply adore.  It is the “sweet spot” model, with an i5 processor (better than i3, but does not require a cooling fan as the superb i7 does), 8GB of ram, and a 256 GB HDD.  I lost the digital “pen” some time ago, and never missed it.  The flimsy fabric keyboard is remarkably good — it’s no IBM Model M, but neither is yours.  I recall being impressed when I tried the keyboard at the store, and to this day it is excellent for what it is.  Most consumer PCs come with a cheap rubber-dome keyboard that feels mushy, misses your keystrokes and doesn’t let you know, and wears out quickly.  This thing is just the IBM of detachable, fabric, 250g (8 oz) keyboards. Color me impressed.

I did have to replace the keyboard-thing after nearly four years, which is not bad, considering the miles it has seen, the way I type, and the fact that it works at all to begin with.  It developed cracks in circuitry, I suppose, with intermittent errors rapidly becoming regular, then insurmountable, and fixed with a replacement, harrumph.  It didn’t owe me anything.  For how easy it has been to just slip this thing into a bag and go, it paid for itself.  I have the “brick” which is silently another tiny PC designed to handle all of your peripherals and such, and that stays at home, plugged into the printer, USB drive, IBM keyboard, mouse, what-have-you.  When I need to go, I just unplug a single connector, drop this thing and its magnetic-magic attaching keyboard/cover into a computer bag with the lightweight travel power supply (which just stays in the bag) and I’m oot.

I spent a bunch for this thing when it was the hottest pancake on the stack back in 2017, with all the bells and whistles, and I don’t regret a penny of it.  I knew I was paying up, but I had been waiting for this platform (Surface 1, 2, 3, and 4 were getting better but still had deal-breakers for me, I forget what), and then when this thing was released, everybody said MS had finally figured out how to hit the target they were obviously aiming at.  I don’t mind paying for the right thing — it’s cheaper than replacing the almost right thing shortly after purchase.  So I tend to buy a really nice thing and then hold on to it, and hope to leapfrog a generation or three.

So now my 5 is starting to complain with some screen flicker and some OS cruft build-up.  It’s not bad, yet, but it will be — that’s the way these things go.  So, which new Surface to buy?  Assuming that all Pro 5s (2017, remember) are in about the same condition or about to be, should I go for the remarkably well-regarded Pro 7, or the new and fancy Pro 9?

Well, none of the above, and I’ll tell you why.  Because they’re made by Microsoft.  Yes, I know, I just spent pages pouring my love for the Beast of Richmond onto your screen, but that’s appreciation for a product that has served me well.    Meanwhile, what it serves me is getting worse and worse.

It’s nigh impossible these days to just use a copy of MS Office.  I have discovered that once you connect to pretty much anything based on Sharepoint or Teams, it will capture your software license under that name or address or something, and then continually either refer to you as “offline”, or warn you when you open downloaded (DOWNLOADED, MIND YOU) documents that they are being edited “by another user”.  I am used to seeing this on share drives, no problem.  It is entirely unwelcome on my home PC.

Make no mistake — Microsoft retains a position of information dominance that may rival Google, sliced along a different plane.  You think Google knows about you?  How much more the people who built your OS, your work apps, your browser (if you’re a sucker, or if you NEED to hit poorly-written sites which complain about browsers, sigh), who may run your email (Hotmail, Outlook), and who DEFINITELY run most of the software you (probably) use at work.  Why does MS always want you to log into everything?  (Just making sure it’s you, tee-hee!).  I tried to use Edge for a balky website (to pay a bill) and it hung up on some login nonsense, insisting that I update some setting before using Edge, and insisting that I log into something before I could access the settings.  The CANCEL button just re-launched the same dialog window.  I was livid.  This is new and unwelcome behavior.  I don’t want my browser itself to know ANYTHING about me — it should sit there as a transparent and ignorant tool.  I want the software to do tasks, not compile a profile on me.  I don’t want to take a ride with my best friend.

Someday and it won’t be long, I’ll shift to a Linux daily driver.  I bought a refurb laptop for my side gig stuff, and they can require and desire whatever they want on it.  No problem — it’s their email address for me, their Microsoft Gulag365 subscription, and their crappy websites.  Amen, Hallelujah, let ’em stick it to ya.  I don’t care — that’s what that machine is for.  And I have a rabidly fancy Windows gaming PC, which doesn’t browse while logged into anything, doesn’t handle email or carry paid subscriptions to Office, etc., do this or that — it’s my “promiscuous” rig, which is allowed to engage in all sorts of silly behavior.  And that will be it.

So I’ll be in the market for a nice Linux rig before too long.  I have several crufty old candidates sitting around, but for once, I may just let somebody sell me a laptop with Linux onboard and a warranty.  Imagine!  So long as the hardware is good enough to virtualize, fine!  Just don’t make me responsible for getting it from point A to point B.  Got tired of that in 1997.  I know what a “busmouse” is.

So my beloved Microsoft Surface Pro 5, from which I write to you now (via an IBM Model M from 1984) is soon to go the way of all things.  And when it goes, Inshallah, most of Microsoft will go with it.