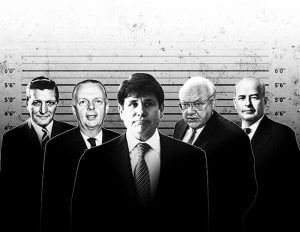 Springfield, Ill – The Land of Lincoln has been inundated with a rising tide of former governors as state penitentiaries released hundreds of convicts over concerns of the latest Covid variant Omicron, referred to by local residents as “Omi-crony.” In Chicago, residents were forced to evacuate their homes as basements became flooded with the likes of George Ryan (R., racketeering) and Rod Blagojevich (D., lying to federal agents.)

Downstate, what few residents remain in the formerly thriving port city of Cairo, were forced onto rooftops as the confluence of the Missouri and Mississippi Rivers overflowed their banks with the addition of former Illinois governors Otto Kerner (D., mail fraud, conspiracy, perjury) and Dan Walker (D., bank fraud, filing false financial statements.)

At press time, current Illinois governor and billionaire J.B. Pritzker had declared a state of emergency in order to receive federal funds for purchasing a new home on high ground.